Nostalgio For iOS Lets You Create Eye-Catching Collages Of Your Images, Free For Limited Time!

We manage to get through boatloads of photo-based apps here at Redmond Pie, and thanks to the rise of Instagram, there are now hundreds – maybe thousands of apps available, which has seen the quality of this category rise to meteoric levels.

Today’s entry goes by the name of Nostalgio, and while sounding like a fictitious character from a Shakespearian play, also makes for a pretty decent photo framing/collaging app for iOS. It’s conceptually simple, and offers an inviting and clean user interface through which you can quickly create, edit and inevitably share your framed images. 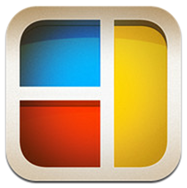 When you open the app, you can opt to include up to four images in the finished article, and if, for example, you select four, Nostalgio will randomly choose four images from your Camera Roll and place them in a frame. While such apps usually offer a blank canvas at this stage, the idea of putting images in without asking can actually help to speed up the process, and you never know – the luck of the draw may actually land the perfect combination. 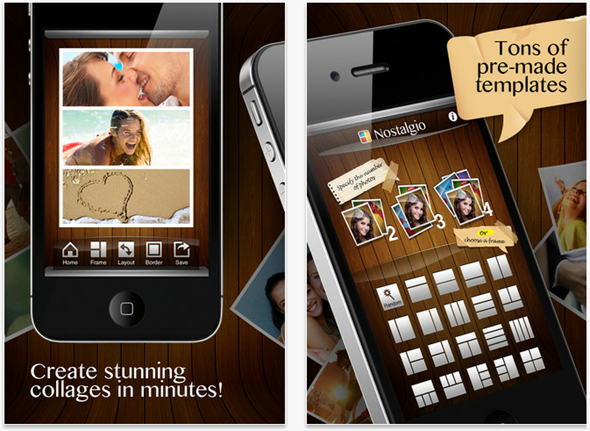 Once you’ve decided which images you would like to include in your collage, you can then edit them thoroughly by tapping on them. Nostalgio allows you to rotate, cross-process the coloring, go monochrome (a common tactic nowadays, it would seem), and crop your images to perfect the final arrangement. 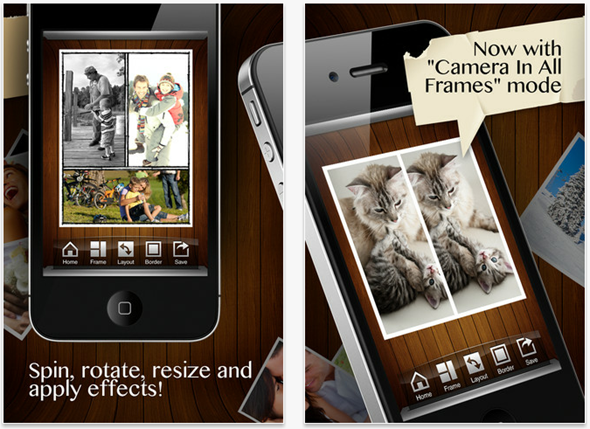 Once everything has been assembled, you are given the option to modify the border, although unfortunately, this is an area where the app falls short. There are just five to choose from, and beside the basic black and white fillers, there’s also a torn paper border, a “drawn-on” border, and another which looks somewhat like the graffiti tool found in Microsoft Paint (yeah, it’s that bad).

It’s free for a limited time only, so if you’re part of the growing legion of image-editing experts, then it’s certainly worth checking out, although personally, I would sooner recommend PicFrame – a similar iOS app which does a much better job.