In order to keep itself in the news amid the iPhone 5, iPad Mini, and various Nexus / Android hype, Nokia has been taking shots at rivaling OEMs (mainly Apple), and in the very latest, the Finnish company has made a point of displaying the Lumia 920’s uniqueness.

The device is set to arrive shortly for Microsoft’s upcoming Windows Phone 8 platform, and will be looking to follow on from the success of the well-received Lumia 800 and 900 released for Windows Phone 7.x.

As we all know, controversy always manages to muscle its way into the blogosphere, so by covertly calling out its fiercest rivals in its latest publicity stunt, Nokia looks to have achieved its objective. An image uploaded to Twitter by Nokia’s Italian arm depicts three students sat in a classroom. One apparently enlightened student is facing the chalkboard, and has already worked out that "PureView + 4.5" + 8,7 megapixel + NFC + wireless charging = Lumia 920," whilst the two other, somewhat confused students (representing Apple and Samsung, we presume) seem confused, and one is quite clearly attempting to copy the other. 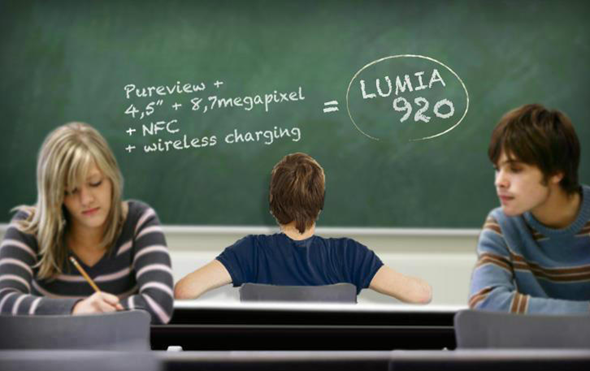 The well publicized court case a couple of months back saw Samsung adjudged to have copied some of Apple’s designs, and the jury’s decision saw Judge Lucy Koh force Samsung to pay $1 billion+ in damages to its Cupertino-based rival. The Korean company is of course contesting the decision, but while that’s still in the balance, Nokia  is taking its opportunities to rub it in.

It’s all light-hearted, and makes the competition just that little bit more interesting, and it will be of great intrigue to see whether Nokia’s vastly different offering – compared with any iPhone / Android – will be able to cause a fuss when it does release to market. The features highlighted in this particular ad – notably wireless charging and a market-leading camera – are two features which could potentially entice consumers towards taking the plunge with Windows Phone 8, and although it’s unlikely to sell in the same quantities as the iPhone 5 or Galaxy S III, the Lumia 920 (and indeed, the 820) could be a sufficient platform for a Nokia comeback.

The Lumia 920 is expected to begin retailing early next month in Europe, and with Nokia’s brand still carrying a significant amount of weight in those parts, Nokia might well become competitive once again.