Nokia may still be wiping off its bloody nose, but it is getting ready for the biggest phone launch the company has ever had to put together. The US release of the Lumia 900 is an important one for Nokia, and it is now clear that the Finnish firm isn’t holding back.

A new website has popped up which sports all the usual hallmarks of a Nokia job, complete with redacted Nokia logo and a countdown timer that leads to the Lumia 900’s impeding release. While all of that is very interesting, it’s the advertising message in general and, specifically, the three YouTube videos that will cause the biggest stir across both Apple and Google. 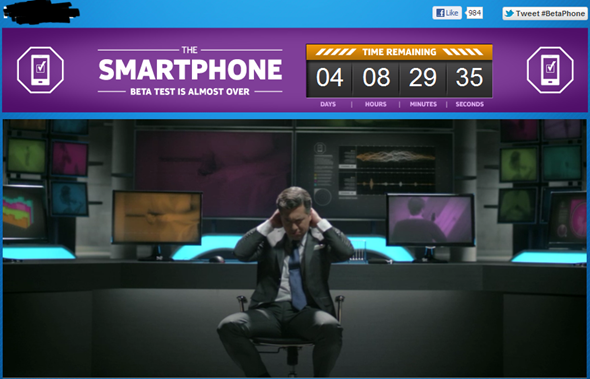 Nokia’s whole push is to poke fun at its competition, namely Apple and Google, by way of claiming that their handsets suffer from more than a few issues.

One video in particular is a clear swipe at Apple’s iPhone 4, with three workers discussing a mystery handset. Clearly working as part of a development team for the phone, one claims that his phone keeps dropping bars, similar to the iPhone 4’s antennagate debacle. The video ends after he is told that he is holding it wrong, which is a nod to the internet reaction from the iPhone 4S issues that plagued the handset’s early months.

Other videos aim more generally at smartphones in general, with handsets apparently being unusable in sunlight outside, and others apparently being too fragile. Both could be aimed squarely at the iPhone, but we suspect that Google is also somewhere in Nokia’s sights there.

Nokia is clearly sure of the Lumia 900, and with Microsoft also now throwing its considerable weight behind Nokia’s new Windows Phone handset, things are set to get even more feisty as the advertising campaign matures. With Nokia having struggled to get a foothold in the United States historically, we’ll have to see if throwing money and a witty advertising campaign at the problem has any positive affect.

Right now, it’s certainly made everyone sit up and take notice, if only because it is interesting to see someone go after Apple so blatantly.

Now we wait and see how Apple and Google respond, though we don’t expect much to come out of Cupertino until the next iPhone release, probably towards the latter end of 2012.