While it certainly took a fair bit of time, Nike+ has finally sprinted to the finish line on Google Play. Just like its iOS counterpart which is pretty popular among people who regularly run and jog, the Nike+ Running App for Android packs quite a lot of features to help people monitor their runs and set goals. You can monitor statistics such as distance and speed across past runs, and, while you’re actually running, you can see in-progress GPS maps, change songs, and even get audio feedback on your run for when you pass certain distance milestones.

There’s also a "Next Moves" feature on the home screen that supplies runners with suggested challenges, such as running their fastest 5k or going farther than their previous recorded best distance. There’s also a pretty big social element that runners can tap into; the app is integrated to nikeplus.com, which is where they can set up goals on their profile, view their statistics, view their friends’ statistics for comparisons, and of course share their runs. 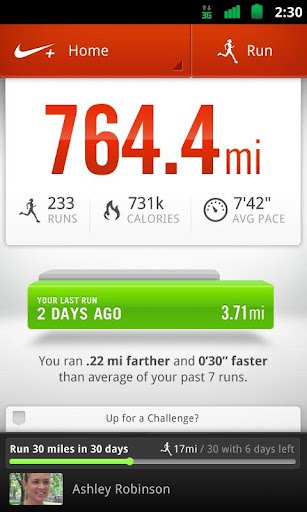 On top of this, you can also easily share to Facebook on Twitter with run summary information. Climate conditions are automatically recorded through weather data that is fetched using the internet, and runners can tell the app what terrain they ran on and how they felt about it through emoticons.

Nike has been no stranger to using technology to help their athletic clientele. On top of their mobile app, they’ve pretty much launched an entire ecosystem of products such as the Nike+ SportWatch, Fuelband, and Sportband, all apart from their collection of Nike+ Running Apps. They also recently announced during Microsoft’s Xbox keynote a Kinect game dubbed Nike+ Kinect Training, that claims to act as a personal trainer, assessing the user and developing fitness programs that best fit them, provided that you don’t mind spending minutes in front of your big screen TV just working out. 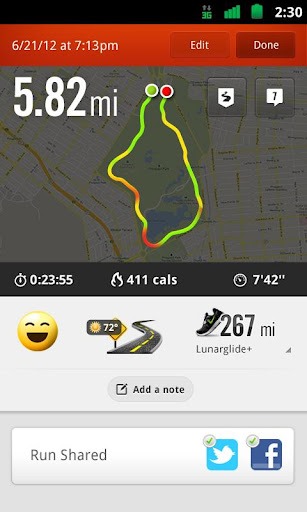 Best of all, the Nike+ Running App on Android is available for the low cost of nothing, so go ahead and download it on Google Play before Nike changes is its mind over pricing.