It is official folks: Samsung is holding an event on October 11th titled UNPACKED 2011: Google Episode where they are slated to announce new hardware and software. 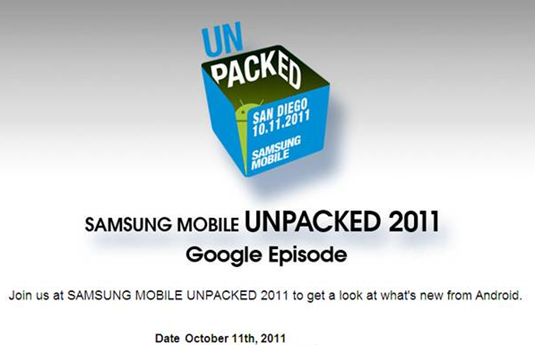 The news comes from TechCrunch – a blog that covers exciting new startups and technology news – in a post where they have posted their invite to the event in question.

As we mentioned at the very beginning of this post, Samsung will be holding the event on October 11th at 11:30 Pacific Time in San Diego, California. The event is titled UNPACKED 2011: Google Episode and it is where Android enthusiasts should expect big announcements regarding Ice Cream Sandwich and the Nexus Prime.

It looks like the wait for the elusive Nexus Prime may soon be over. Samsung has just started sending out invites for a special Samsung/Google event that’s being held on October 11 at 11:30 AM in San Diego. The topic isn’t listed, but the invitation says we’ll see “what’s new from Android”.

We’ve heard plenty of reports about the Nexus Prime by now. It has been given all sorts of names which play with the terms Droid, Nexus and Galaxy. One report suggested that the smartphone would be called Droid Prime and would be exclusive to Verizon Wireless in the United States, while another cited a Cease & Desist letter from Samsung which suggested that the name would be Nexus Prime instead. We’re not as bothered about its name as we are about its hardware and software…

According to different reports, the Nexus/Droid/Galaxy Prime will have a dual-core 1.5GHz chip (possibly Samsung’s own Exynos 4212), a 720p Super AMOLED HD display (like that on the Galaxy S II HD LTE), 1GB of RAM and an 8 or higher megapixel camera. It is set to be based on the next major release of Android i.e. Ice Cream Sandwich.

Samsung and Google are expected to talk about the features and formal release date of Ice Cream Sandwich (ICS) at their event. Not much is known about ICS at this point, except that it will be the “most ambitious [Android] release to date” and that it will be the grand unification update for Android that will work on smartphones and tablets – one OS to rule them all.

A video showcasing a Nexus S allegedly running on Ice Cream Sandwich popped up today so you might want to see that.