If you’re an Android fan who is eagerly awaiting the release of the next-generation Nexus smartphone, then prepare yourself to feel all warm and fuzzy inside. The latest image that we are seeing flying around the web could potentially be the clearest and best quality leak of the device that we have seen to date and pretty much shows us exactly what’s in store for the Nexus 5 – at least aesthetically.

This latest image of the purported LG manufactured Nexus 5 has been thrust into our lives by a member of the MacRumors forums. Not only did he manage to get a very decent snap of the new Nexus smartphone, but he also claims to have held the device in his hands and interacted with content on the display. We have previously suggested that this new Nexus device would look and feel a lot like the fantastic Nexus 7 tablet that has a premium but soft feel to its external shell. The person responsible for this latest leak seems to confirm that theory by suggesting that it has taken inspiration from the tablet.

Every individual will undoubtedly look for, and appreciate different aspects of a smartphone. However, the most recent Nexus 5 leaker says that the device itself feels extremely compact and lightweight in the hand, and confirms that it has a reduced bezel size around the extents of the display. The screen on a smartphone is arguably one of the most important aspects of the device, but the jury will still be out on this one as weespeed describes the display quality as “ok” and comments that it definitely isn’t as good as the new Galaxy Note 3.

The aesthetics and provided information definitely seem to match all of the previous leaks we have seen that are believed to be of the LG Nexus 5. We are expecting the handset to launch with a 2.3GHz Snapdragon processor and 2GB of RAM. Speculation is also mounting that the Nexus 5 will ship with a rear-facing 8-megapixel camera and a multitude of hardware based sensors that are standard on a device of this nature these days. Integrated wireless charging protocols and Near Field Communications (NFC) technology would also play an important part in packing out the technical specification. 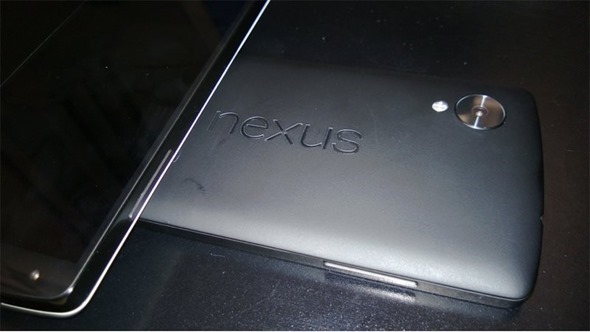 Until this little gem is actually officially announced and in our hands, we won’t know if any of these leaks are genuine, but the evidence is definitely mounting as we get closer to a launch.