At Google I/O this past week, the search giant made it abundantly clear that it’s serious about pushing ahead with fingerprint sensor technology, so much so that Android M – the next iteration of Google’s open-source smartphone and tablet operating system – will carry a native fingerprint API that manufacturers can make use of for better integration. To drive the point home, the company showcased a video that exhibits how fingerprint-enabled devices will work on Android M, once the feature is fully implemented. What we found interesting however, was the fact that amid the video, the lady pulls out what appears to be a Nexus 5 carrying a fingerprint sensor.

In all fairness, she does clarify that she’s using a standard-issue Nexus 5 that has been modified and fitted with a fingerprint sensor for the sake of this demonstration. Hence, we shouldn’t be confused that this is some new device that Google is hinting towards, but rather, just a demo unit. Who knows, maybe even the fingerprint sensor is just a gimmick, and not a fully-functional piece of hardware. 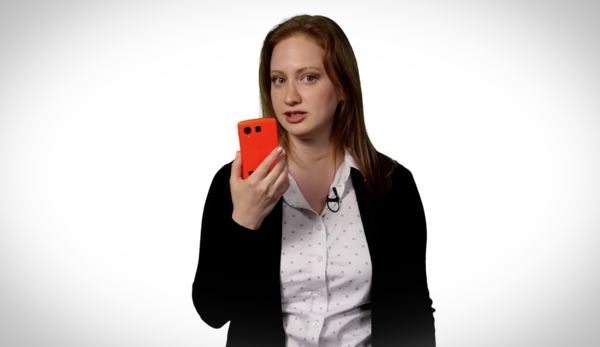 There have been rumors circling the blogosphere about an upcoming Nexus 5 iteration which will be a product of LG, to see the light of day in 2015. However, there hasn’t been any hard evidence to support it just yet. When Google put out this video, it got some people – us included – excited, that this might be it. However, if we were to put stock in the disclaimer that’s expressed within the video, our hopes dwindled fairly quickly.

Another interesting aspect of the video was the black bar at the bottom of the device that the lady was cleverly covering with her hands. In fact, you don’t get a single clear look at it, so there isn’t much to say here except speculation, which we’ll refrain from at this point.

While it’s possible that this is an early prototype of the rumored 2015 Nexus 5, we wouldn’t infer too much from this video. What this demo clearly exhibits is that Android M’s fingerprint API works flawlessly, and when it finally catches on with mainstream devices, we’ll be able to enjoy fingerprint-enabled payments as smoothly as iPhone customers have been able to do for quite some time now – using Android Pay.