In the days and weeks leading up to today’s event, it was widely presumed Apple would, aside from announcing the iPad mini, also announce a refresh to its iMac and Mac mini computers. The rumor mill has proven itself to be on-point once again, and both desktops have been offered a substantial spec bump in line with the MacBook Air and MacBook Pro back in June.

It’s once again a case of Ivy Bridge and USB 3.0 all round as Intel’s vastly-improved chipset continues to spread throughout tech space. Having used an Ivy Bridge i5 for the past couple of months, I’ve been impressed by the general performance enhancements, and anybody purchasing one of the new Macs will notice a considerable difference.

Whilst it doesn’t seem as though the world is quite ready for USB 3.0 in terms of device support, it’s good to see all of Apple’s mainstream desktops and notebooks now supporting it. Companies like Apple have a huge influence on the direction technology goes, as well as the speed in which it evolves, and although the Cupertino is renowned for dragging its heels in adopting certain technologies (read: 4G LTE), it’s good to see USB 3.0 out there and essentially ready for action. 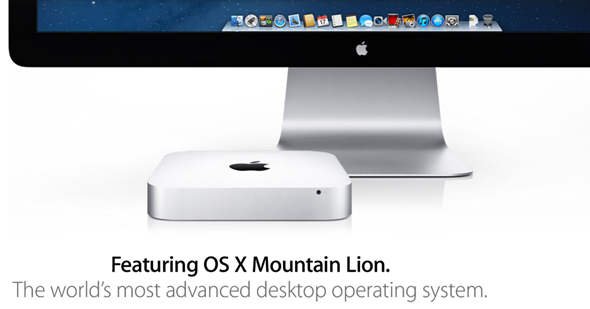 The Mac mini now comes in three processor configurations and memory options. Starting with the 2.5GHz dual-core i5 CPU, which comes with 4GB of RAM and a 500GB hard-drive. Taking things up a notch, you get a 2.3GHz quad-core i7 CPU with 4GB of RAM and a 1TB hard-drive. And just like we suspected, the new Mac mini has that trusty old Intel HD Graphics 4000 chipset, so don’t expect any sort of high-end gaming out of this little box.

The server edition of the Mac mini carries a 2.3GHz quad-core CPU, 4GB of RAM and whopping 2TB hard-drive.

On the back of the Mac mini, you get the same array of ports and all, which include: an HDMI connector to connect an external display, an SD card slot, 4 USB 3.0 slots, a Gigabit Ethernet port and a Thunderbolt port. And yes, the audio I/O is there for all you music lovers out there.

The Mac mini goes go on sale as of right now, and in a real turn up for the books, the prices remain exactly the same as before. This means the Mac mini costing a mere $599 for the entry-level model and $999 for the server edition.