For quite a while now, it has been apparent that Samsung could deliver two rather different handsets at the point of the Galaxy S5’s launch, and with the MWC showcasing just a couple of days away, an Amazon listing has all-but confirmed this to be the case. Spigen, maker of numerous smartphone cases and accessories, has sought to beat competitors to the draw by retailing its range of Galaxy S5 cases prior to the announcement, and in doing so, has suggested that there will, in fact, be separate "Prime" and "Standard" models.

From what we’ve heard, the higher-end device will cater to the U.S. market, and will boast a more robust show-reel of tech specs in comparison to the other model, which is said to be aimed at European consumers. But importantly, talk of the so-called Prime version releasing much later than the Standard handset has also left smartphone fans in anxious wait, wondering whether the more powerful, all-singing Galaxy S5 may be a couple of months – rather than a couple of weeks – away from hitting the retail channels.

But this Spigen listing seemingly alludes to an imminent release of the Prime model, which is encouraging if, like us, you’re keen to get your hands on what will likely be the most powerful Android smartphone to date.

We know that Samsung will be taking the wraps off the Galaxy S5 at the Mobile World Congress in Barcelona on Monday, but while – if there are two devices – we will probably see both next week, it’s still hard to determine when – and for whom – each handset will be released.

The case listings offer very little differentiation between the two devices, although intriguingly, one offers a physical home button whilst the other doesn’t. 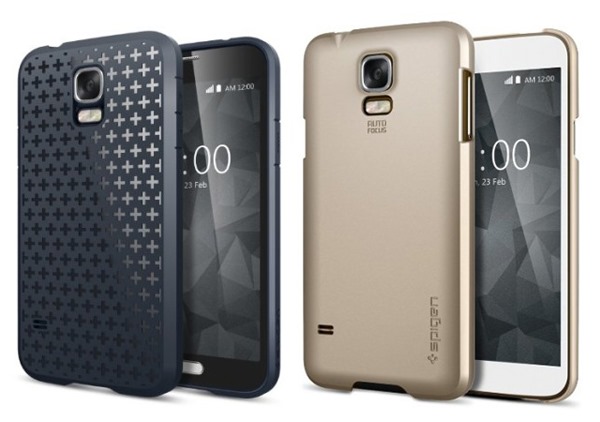 With just a couple of days to go before we can put the rumors to bed, Samsung has done a great job of keeping everything a secret, and although we may gain further insight at some point this weekend, it’s safe to say that we’ve still plenty to learn of this enigmatic handset.

We’ll be keeping an eye out for any further snippets leading up to the very exciting prospect of MWC, so stay tuned!