Apple TV was once looking like a forgotten device. Once famously dubbed a "hobby" by then COO Tim Cook, the little black box has not seen much love inside Cupertino, let alone outside. Yet, while the talk of a more strenuous connected TV effort remains on the lips of many an analysts, the fruit company is pressing ahead with updates and improvements to the current generation, and now, enhancing its functionality looks to be squarely on the agenda. The latest Apple TV beta suggests music purchasing will soon become a native feature, and with Bluetooth 4.0 connectivity facilitating new setup features via iOS 7, there still appears to be plenty of life left in the set-top streamer.

iTunes music downloads used to be a feature of Apple TV, but at this point in time, one can only purchase movie and TV content. 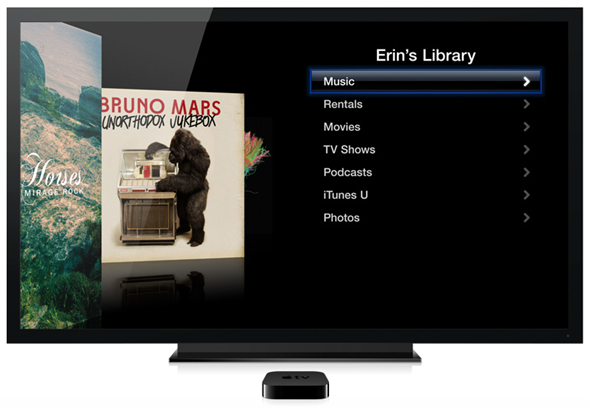 The current beta of the software update, which should surface later on this year as a final release, shows a modified Music app that allows a user to jump straight to the iTunes Store and make a purchase, á la OS X and iOS. At the moment, one can only check their current iTunes library through the Music app, and while this is perfectly adequate for the most part, the ability to add songs at will has been seriously lacking. 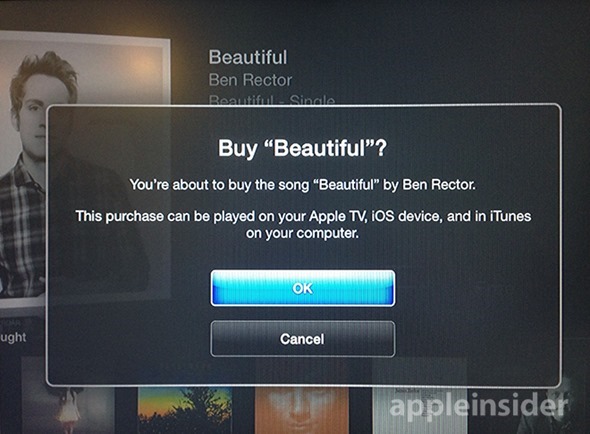 As you would expect, a user can preview songs, search through a wide range of artists, and as has been the case with iTunes for a number of years, make individual purchases of songs. Alternatively, one can pick up an entire album, and once the verification process has been completed, the music files itself into the library ready for listening.

Also in the offing for Apple TV is a new "touch to configure" feature, allowing Bluetooth 4.0-enabled iOS devices to aid the initial Apple TV configure process. The Apple Remote is notoriously tedious for anything other than simple navigation, but the new feature uses an NFC-like technique to render the process as seamless as possible.

Once your device is unlocked and Bluetooth is enabled, you touch your Apple TV using the device, and from there, can configure your Apple-branded set-top box right from your device.

It’s a novel process, and just goes to show that Apple’s decision not to jump on the NFC bandwagon certainly hasn’t restricted its product range in any way.