Mute Your Android Smartphone’s Camera Shutter Sound For Good Without Root, Here’s How

Smartphone manufacturers do pretty much all that they can to give users a great experience when using their hardware. That experience usually extends to all aspects of the system and invariably involves making the experience as true to real-life as possible. System actions like receiving incoming phone calls contain a ringer, sending an email is usually followed by some kind of sent tone and using a camera generally has a default shutter style noise attached to it. That’s all well and good, but what happens if you want to preserve the system sounds but deactivate that sometimes annoying and disruptive shutter tone? Well, if you’re an Android user then Camera Mute could potentially be right up your street.

Let’s face it, we’ve all been in a situation where we’ve discovered the perfect opportunity to capture an amazing photograph. You pull out your Galaxy Note 3 or Galaxy S4, point at the desired target and hit the capture button only to find that you forgot to switch the device to silent mode or turn the volume right down. The situation is made even worse if that aforementioned photo opportunity happens to be one that requires stealth and secrecy. The shutter tone on all modern devices is immediately recognizable for what it is and gives the game away instantaneously.

Some devices actually contain the ability to easily switch off the camera shutter sound independent of the rest of the system tones. For those that don’t then Camera Mute would seem to be the perfect solution to this problem and comes in the form of a lightweight app that doesn’t require any kind of root access to the device. The app does pretty much what it says on the tin, but it does also come with a few caveats. Firstly, it will actually only work when used in conjunction with the default Camera app. Any Android user using a third-party app as their main capture medium can walk away from this one now. 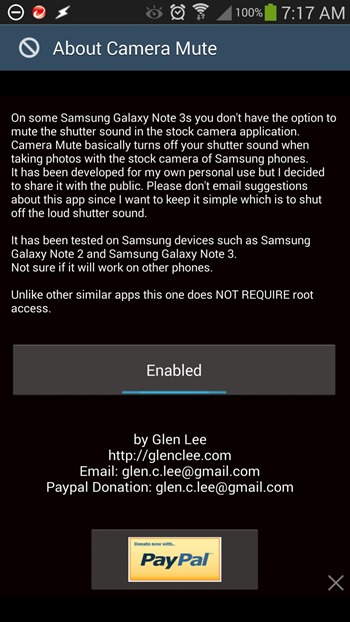 Camera Mute was originally written to scratch the itch of a Galaxy Note 3 owner but has been proven to work with all of the Galaxy S Series of devices as well as devices like the Galaxy Grand, the Lenovo P780 and the new LG G2. Not exactly the most innovative or earth-shattering of functionality, but it definitely scratches an itch that a lot of users have.