This may start a flame war, but in my opinion there is no doubt that smartphones released after 2007 have a design that is, in one way or another, inspired and influenced by the design of the original iPhone. Physical keyboards are almost completely dead, front side of smartphones are quite often dominated by their display etc. etc.

Is it possible now that the next smartphone that influences the next era of smartphones comes from Motorola? If a new report from Bloomberg is anything to go by, that may just turn out to be true. 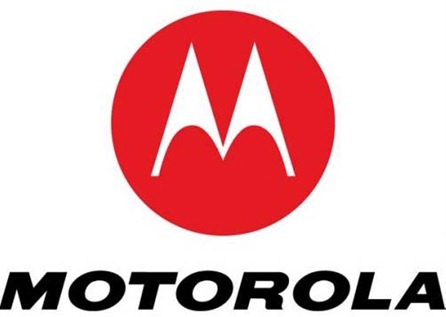 Bloomberg cites “a person familiar with the product” who claims that the mystery device that will come out of Motorola and Verizon Wireless’ joint event on September 5th will be an Android smartphone whose front will be dominated by its display. We aren’t talking Galaxy Nexus levels of display dominance with its lack of physical buttons here, we’re talking about a front that is all display and nothing else.

After snooping around a little, I feel that this claim will indeed turn out to be true. Have a look at the September 5th event invite: 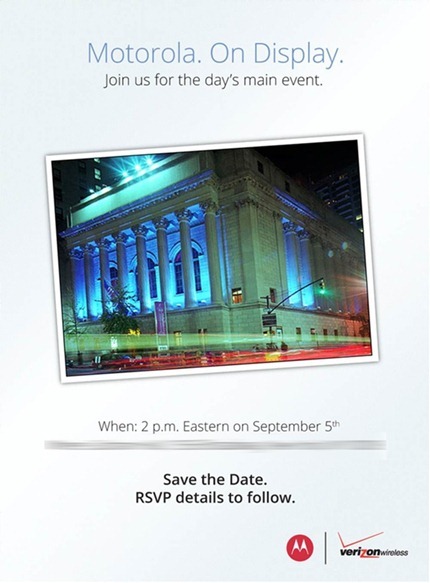 The frame you see in the image above minimal bezel; it’s hinting at an edge to edge display! If that’s not enough, have a look at the invite for the September 18th event in London: 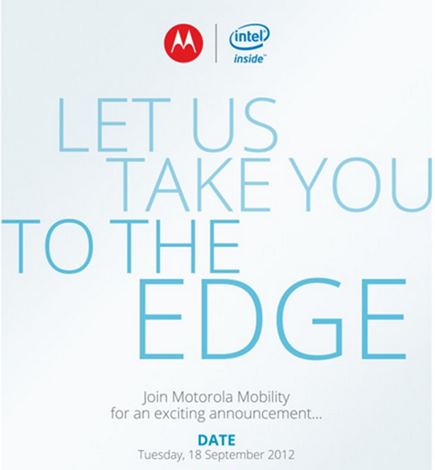 “Let us take you to the edge”? That’s subtle.

I am strongly convinced that Bloomberg’s report is true: Motorola is coming out with a 4G LTE ready Android smartphone next week that will have push smartphone design forward. As with every design overhaul (just like the one from 2007), there are going to be some controversy among smartphone enthusiasts. People will be peeved by the lack of physical buttons. There may be usability issues with user’s palms accidentally touching the edges of the display and interfering with touch input. Other unseen issues may also prop up.

Still, issues will get fixed and people will come to realize just how awesome bezel-less displays are. They heighten the experience of using apps and watching movies by removing borders which is a big visual obstruction.

What are your thoughts on an edge to edge, bezel-less display?