One of the prime difficulties with moving to a new phone or upgrading your existing device is all the valuable data that you leave behind in the old one. Thankfully, we’ve come such a long way in the world of smartphones that it isn’t that much of an issue any more, as third party solutions allow you to achieve that with relative ease, even though it’s a hassle. Things become really interesting (and difficult), however, when you decide to move between platforms, especially from iOS to Android.

Bitter as the rivalry is between Google and Apple, both the tech giants don’t make it easy on you to move your important data from one platform to another. There are ways around that, of course, like using Google Contacts to sync your contacts, using an online backup service for SMS messages, and use a computer for other media, but it’s not really ideal now, is it? That’s what Motorola aims to change with its Motorola Migrate app for Android.

The app in question works only with Moto X, Moto G, DROID Maxx, DROID Mini and DROID Ultra smartphones from Motorola, and allows easy migration of content to and from iOS, using Apple’s iCloud interface. The best part is that all the transfers happen wirelessly over the Internet, so you don’t need an intermediary system to achieve anything.

Since the app works for both way transfers, there’s a difference in the kind of content that you can move. Once you have Motorola Migrate installed on your Moto phone, you have a couple of choices. If you’re transferring stuff to your new iPhone from an Android device, you can transfer items like photos, videos, text history, call logs and SIM contacts. 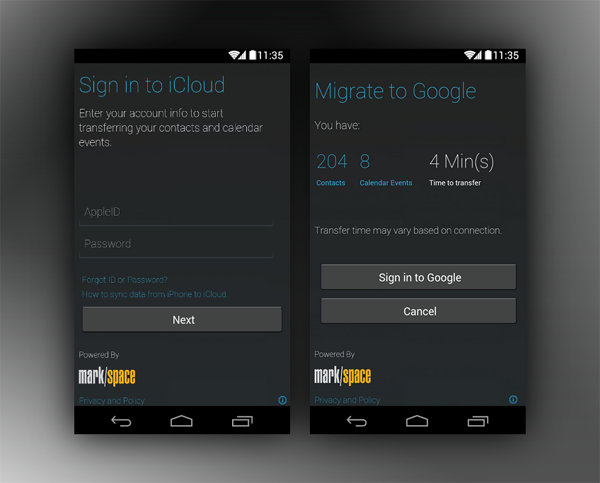 The options when transferring items from an iPhone to a Motorola phone are limited, mainly because of iCloud’s own limitations. What you get this time are just contact details and calendar events, and those, too, if they’re synced with iCloud. Since that’ll be the case for most users anyway, it isn’t a problem, really, but it is limited options nevertheless.

While not highly useful except for a few choice devices, Motorola Migrate is a free app available from the Google Play Store with Android version 2.2 and above as minimum requirement.

(Download: Motorola Migrate for Android on the Play Store)