More Images Of iPad 3’s Front Panel Surfaces, Will Be Available In Black & White, Will Have A Home Button

We can all sit back comfortably knowing that in the next few days the Apple rumor train, which has been rife recently, will soon descend back into the station, at least until we start nearing another product launch. In the last few days we were treated to reports which surrounded a leaked photograph of what was believed to be the front glass and digitizer for the soon to be announced third generation iPad. If the images found on the Sina Weibo, the Chinese Twitter equivalent, do represent the front panel for the new Apple tablet then it would appear that not a great deal has changed aesthetically other than the connection ribbon.

One small iPad rumor in the last couple of days has also suggested that we might only see the new iPad release in one color, but if reports from the guys over at Repair Labs is anything to go by, this seems to have been blown out of the water. They have managed to get their hands on what they are calling the front assembly of the iPad 3, which shows that not a great deal has changed in terms of design and when coupled together, with the rear shell; it looks as though we are expecting a tiny 1mm difference in thickness from the iPad 2. The images also show that a black and white model is certainly on the horizon, but the more keen eyed amongst you will also note that there is indeed a very visible and familiar looking Home button. 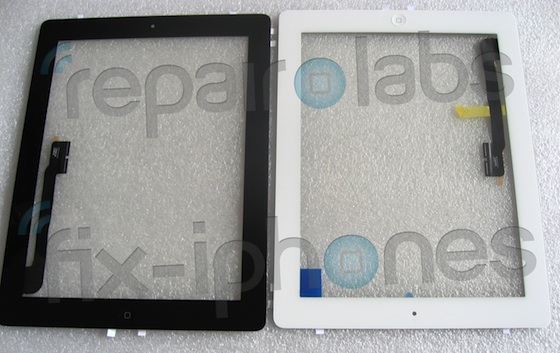 The Apple loving world almost went into melt down when the company officially sent out their media event invitations to select outlets which featured an ever so small portion of an iPad, giving the illusion that no Home button exists. Mass panic ensued with mountains growing out of mole hills and people started speculating that the new iPad will be operated entirely through the use of gestures. While I am pretty sure that the Home button will disappear on all iOS devices at some point, the leaked photographs seems to give a clear indication that it won’t be happening this time around. Obviously, we have no guarantee that these parts are legitimate components from the new tablet, but it would seem a reasonable assumption to believe they are. 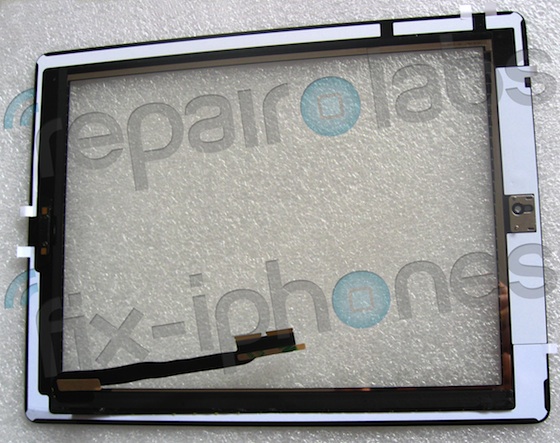 With the media event scheduled for six days time at the Yerba Buena Center for the Arts in San Francisco, the world will have their gazes firmly affixed on Tim Cook waiting eagerly for the first glimpse of the new gadget to see just what it has, or doesn’t have on the front panel. The new iPad is definitely an announcement we are looking forward to, but don’t forget, it is still looking likely that we will see something else announced as well, maybe a revamped Apple TV with a faster processor and 1080p streaming. Here’s hoping.