Photography based apps are ten-a-penny on the App Store with new creations seeming to pop up everyday that pretty much offer the same point and shoot then add filters functionality. Some of them differentiate themselves through the user interface or offering variable social sharing channels but it generally boils down to being the same app with the same feature set just wrapped in a different skin. The Mirrorgram app for iPhone and iPod touch stays true to that feature set but then also adds a unique little twist of its own that acts as the apps core functionality.

The name of the application probably gives an insight into what it is primarily used for but those who make the $0.99 purchase will be able to create unique, engaging and in some cases very whacky photographs using the mirrored image camera functionality that is built into the app. Images can be created by either selecting an existing photograph from the camera roll or saved albums and applying the mirror effect or by actually using the live mirror effect laid over the top of the device camera to capture a mirrored image in real-time. 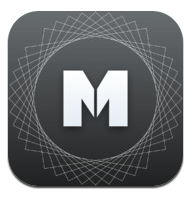 In addition to the mirror effect, Mirrorgram also contains a number of post-capture filters that users will be used to seeing in applications like Instagram or Hipstamatic. A number of different filters are included that can be applied directly to the mirror images to spruce them up. Alternatively the image can be left as-is with only the mirrored effect applied. The final stage in the process is the obligatory saving or sharing the created image to multiple social networks for others to admire. 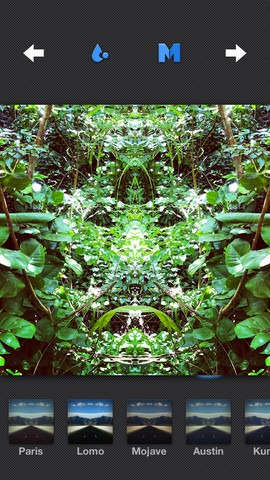 Images created with the app can be shared on Facebook, Twitter, Instagram or StageBloc as well as the much-needed option of just saving the image to the device for later use or setting as a wallpaper on the phone. The interface of the app is simple, easy to understand and can be classed as no-frills as it doesn’t bombard the user with any unnecessary options or popups. Users can also opt to purchase a couple of extra filter sets from within the app for $0.99 a piece. 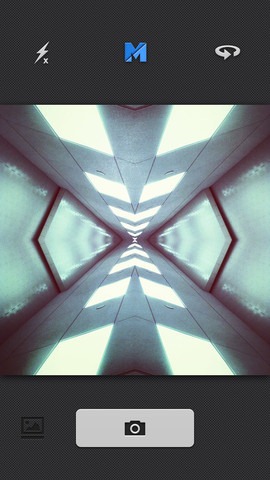 (Source: Mirrorgram for iPhone and iPod touch on the App Store).