Microsoft’s Surface is one of the most sought-after slates to be releasing this year, and as such, one would expect anybody lucky enough to have their hands on one already to be treating it with the utmost care; enjoying a device very few people have even seen in the flesh. Of course, such rules don’t apply to Steve Sinofsky – the leader of the team which has created the Surface – and in a rather comical sketch, has demonstrated how the device also doubles up as a rather useful skateboard.

While we see plenty of clips illustrating how not to use electronic devices (the blending contest between the iPhone 5 and Galaxy S III we saw yesterday, for example), it’s fairly rare to see such circus activity from a company like Microsoft. In fact, its almost as though the company has changed its entire mentality and demeanor with the stylish, modern look of Windows 8, and here’s Sinofsky doing exactly that by skateboarding on a Surface: 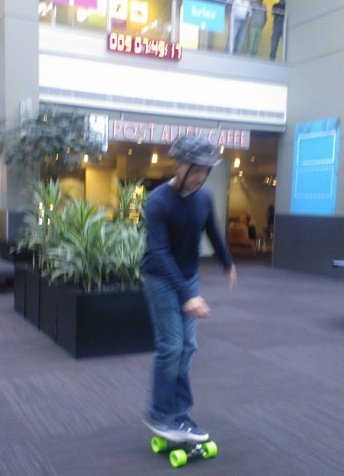 Any publicity tends to be good publicity in the tech world, but we’d say this is slightly better than good, and although few of us would dare to mod an expensive tablet for this purpose, it’s good to see a fusty old software veteran like Microsoft let its hair down and partaking in such horseplay only usually seen on YouTube. 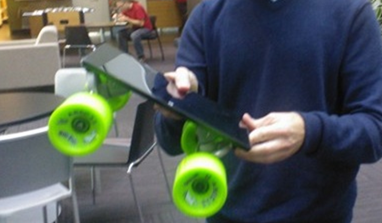 Although the display of the Surface is at the higher end of the tablet screen real-estate spectrum, it’s not adept for skateboarding, so we doubt Sinofsky managed to pop any ollies when skating around Microsoft’s campus. In fact, it’s more than likely he fell off such a small surface area – hence the release of a couple of blurry images rather than the video they were likely to have been snapped from.

The Surface has just been opened for preorder by Microsoft, with those rubber-stamping their purchase promised a unit shipped on the very day of the October 26th release date. It arrives with Windows RT, Office Home and Student 2013, and starts at $499 for the base model.

It packs in 2GB of RAM, Bluetooth 2.1 and USB 2.0 ports, but unfortunately for those of you hoping to grind around your local skate park, it doesn’t come with any wheels – illuminous yellow or otherwise!