As soon as I am done getting this news to you, I am heading out to the nearest Staples store. Oh wait – that’s not really needed until July 14, because that’s when the pricing for all Surface RT models is being cut by $150.

Microsoft had decided to slash the prices for its first generation Windows-RT based Surface tablets earlier following a low-sales-volume trend observed for the otherwise well-equipped tablet, according to The Verge. That doesn’t come as that big of a surprise, since in comparison to the iPad, Microsoft’s first three months of sales volume reportedly amounted to only 400,000 units. Sadly, the trend is indicative of what the world saw with HP’s TouchPad, which, after going through several price cuts and discounts, was finally discontinued as a product.

The reduction of selling price for Surface RT tablets has been confirmed by a weekly promotional ad from Staples itself, according to which the price cut will become effective from July 14 this year. Based on the new model, the new price of the Surface RT would be as listed below:

While the Surface RT isn’t an indecent tablet at all (it runs on a Tegra 3 processor with 2GB of RAM on board), the lack of quality apps in the Windows Store is what remains the top reason for low sales volumes. With both the iTunes App Store and Google Play Store boasting hundreds of thousands of apps, Microsoft still has a long way to go before it can compete in that domain. On the other hand, the Surface RT can actually be used for real productive work, thanks to the availability of an actual Office Suite and not some replacement apps. It does matter a lot on what you use your tablet for more, but there are pros and cons to both sides. 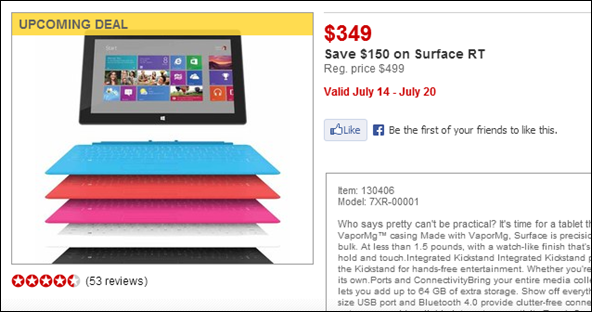 Reducing the retail price on Surface RT isn’t the only way the Redmond company is trying to enlarge the footstep of its tablet devices in the market. Microsoft has also launched an educational partnership program, where it will be selling Surface RT tablets to schools and institutes for $199, while stock clearance has been further observed at the company’s TechEd and Worldwide Partner conferences as well. It’s evident that the software giant is serious about its Windows RT platform, but will that suffice? Let’s keep observing. Meanwhile, it’s a good time to grab a Surface RT tablet if you’d ever wanted one – I know I will.