The computers were powered by chips made by Texas Instruments, Qualcomm and NVIDIA graphics hardware to display Windows 8’s advanced new graphics. A lot of form factors were demoed, from a bulky Dell XPS running the new operating system to tablets of all sizes, all running Windows 8’s new live tile interface. 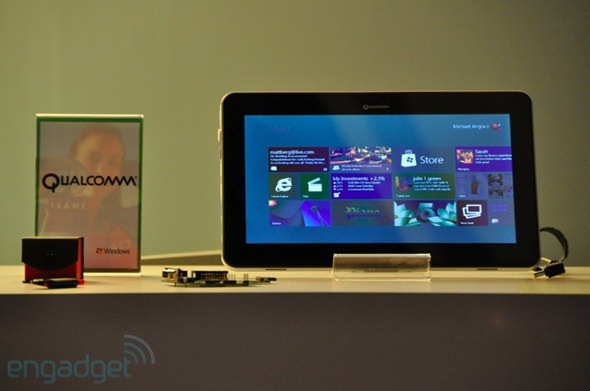 This came a few hours after Microsoft publicly showed off Windows 8 for the first time. While we have no word on shipping date yet, we’ve seen how Microsoft will approach the fast-growing tablet market. There will be a new "Start" panel which will display information, documents and launch applications, some specifically designed for Windows 8 which will open within the new Start panel and others that will run as standalone applications, like they do today on Windows 7. The user interface looks similar to "Metro", the user interface found on Microsoft’s Windows Phone 7, but supports even better graphics, which results in an even prettier interface.

Speculation about the future of Windows began within months after Windows 7 shipped. Enthusiasts have extracted themes, wallpapers and programs from leaked builds and discovered a new user interface, much cleaner and designed specifically for tablets, but we hadn’t seen the final product until yesterday.

As with any prototype hardware, none of these machines will hit the market anytime soon, and if they ever do, they won’t necessarily look like what we saw yesterday. Still, it’s nice to see hardware manufacturer’s jump on board and help Microsoft advance its new operating system.

Microsoft has ventured into full-sized multi-touch computers before. Last year, the company attempted to make a splash with Windows 7 "slate" tablets, touch screen devices running a full-fledged copy of Windows 7. Although that might have turned eyes at conferences, it had very little impact in the consumer space, since Windows 7’s user interface just wasn’t made for portable touch screen devices.

It’s nice to see Microsoft putting some serious effort into their user interface design. While there is no way to try out the new operating system yet, it now seems Redmond is in the game now. Hopefully the enthusiasm won’t fade away this time around.