Even the most hardcore of geeks need a little bit of tenderness in their lives every now and then, which is why coders all over the world will be winding down this Tuesday for an evening of romantic loveliness with their significant other. But just what kind of gift do you get for your loved one? You could try treating them to a romantic meal at a posh restaurant, send them a bouquet of flowers to their workplace or maybe just a simple expression of love through a Valentine’s Day card?

Well, if you are Instagram co-founder Mike Krieger’s girlfriend, none of the above was good enough for her man which is why she took St. Valentine’s Day to the next level and launched her own interactive Valentine’s Day card maker which she has called Lovestagram. Kaitlyn Trigger has been dating Krieger since before his popular photo sharing application was launched and decided that as an expression of her love she would go above and beyond the traditional gifts by learning how to code and developed her very own e-card creating application which is built upon the Instagram API.

The lovingly named Lovestagram application works by creating a slideshow of photographs that have been shared between two users on the Instagram network by using usernames, photos shot in the same location with an hour of each other or the exchange of comments. The application is extremely simple in its usage and requires the user to log in using your own Instagram username and then simply enter the username of your significant other. 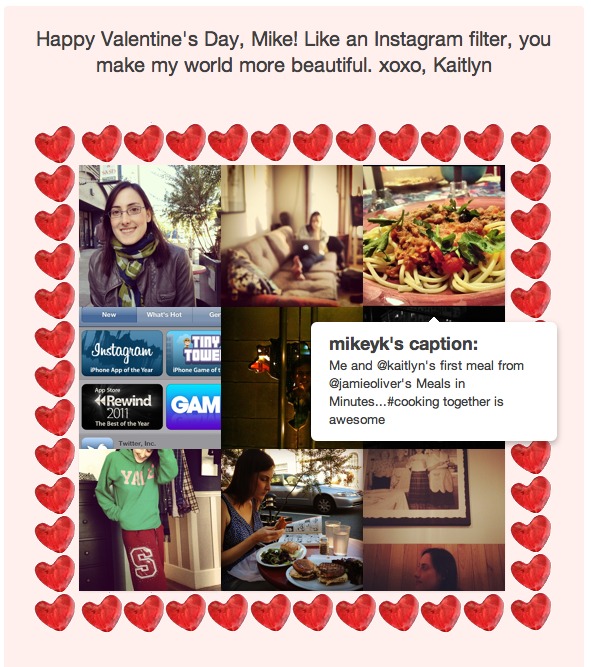 Lovestagram doesn’t have a requirement that you are in love with the person you create the card for, and it will work with any username you enter. Although you may look a bit silly sending an interactive card to a work colleague considering at the present time all of the frames contained within the app are love themed. The developer is currently considering whether or not to expand the application to include alternative frames which may cover holidays, birthdays or even anniversary cards in the near future.

Trigger describes Lovestagram as “basically letting you look through your relationship in photos“, which I have to admit is something that would appeal to me if only my other half was an Instagram user. The creation of such an application for her loved one is a romantic enough gesture, but the fact that Kaitlyn actually had to teach herself Python, Django, HMTL, CSS, jQuery and Photoshop to accomplish the task, makes the gesture even more thoughtful and special.

Rumor has it that Instagram co-creator Krieger knows that Trigger has a project in the works, but supposedly has no clue about what the site is. I think that in the next couple of days the coverage on tech sites might just let the cat out of the bag.

Head over to this link to get started on Lovestagram.