Listener Redefines The Concept Of A Minimalist Launcher For Android

Launchers are one thing that truly define Android. While iOS has been following a strictly conventional design for a long time now, Google’s smartphone and tablet operating system has consistently and elegantly been different thanks to a huge variety of third-party launchers that are available across various forums and Google Play Store. In fact, the popularity and utility of launchers is such that big Original Equipment Manufacturers (OEMs) like Samsung and HTC, have their own brand of custom Android skin that runs on top of the native OS underneath.

One thing that you’d find common across almost all launchers, however, is that they are usually loaded with features. Then, certain elements, too, are consistent across the majority of these, like widgets, multiple home screens, scrollable wallpapers, status bar etc. What it means for the end user is that even if you’d get a different feature set or performance from a certain launcher, you’d still be getting the same basic outlook, no matter how much you change it. While this may be a good thing in general, sometimes, things are much better when they’re simple. And when it comes to simplicity, I have hardly seen anything as brilliant and exquisite as Listener. 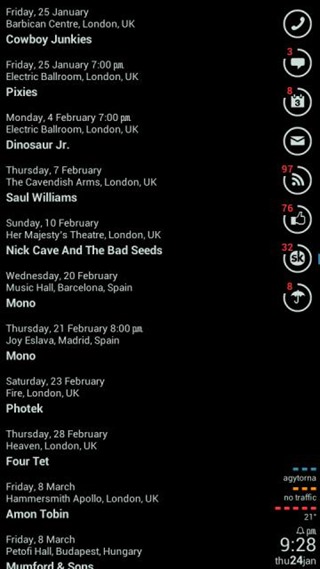 Developed by XDA member deanimo, Listener is unlike anything I’ve ever come across. In its essence, it’s a third-party launcher alternative for Android, but that’s where the similarity ends. Listener Launcher sheds all the common elements of other launchers like fancy wallpapers, multiple screens etc., in favor of two screens – one massive app drawer with every app pushed within, and a screen that lists all your notifications, updates, call logs, as well as time, date, weather info, network signal, remaining battery etc. – no status bar, no widgets, nothing else!

If you think the concept is not practical, think again – or better yet, give Listener a try for yourself. The thing is a complete beauty! To make up for the missing widgets, the launcher uses “providers”. Configurable through Listener’s settings, the providers include services like telephony, SMS messages, RSS feeds, email alerts, calendar appointments, social network updates etc., which would add a placeholder for their respective service on the launcher’s main screen, along side the most recent notification from the provider, as well as a shortcut to access it. It’s much more convenient than it sounds, and hard to understand until you’ve given it a try. 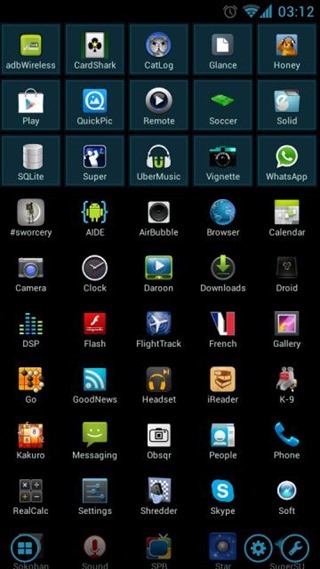 Listener comes with a fairly good set of configurations parameters, and is worth giving a try even if just for the sake of it. The app is being distributed through the official XDA thread (no Play Store availability yet), so you may want to head on to the source link below to grab it. You’ll also find some worthy usage instructions in there, too. Listener Launcher, as of now, supports devices running Android. 2.3 and above.