This last week of October is jam-packed with really exciting media events from the personal computing industry. Apple revealed awesome new products like the 13-inch MacBook Pro with Retina display, all-new iMacs, “iPad 4” and, of course, the iPad mini at their event yesterday. Microsoft’s Windows 8 and Surface RT launch event is set for tomorrow and Google’s event is scheduled for October 29th.

Now, pertaining to the Google event, we’ve come across new very official-looking images of the LG Nexus 4 which is expected to be announced at said event. Check out the image after the jump!

The images come from the anonymous evleaks account on Twitter which regularly shares photos and images of unreleased and unannounced smartphones.

Two images showing the “Nexus 4”’s front, back and side, were uploaded on the account, giving us a pretty clear picture of how it will look like. The design looks like a mix of LG’s Optimus G and the plastic-y Samsung Galaxy Nexus; it’s nothing like the premium design of the polycarbonate body of the HTC One X or the aluminum + glass combo of the Apple iPhone 5.

LG’s “Nexus 4” has been seen in various other photos and screenshots, but these are the clearest images so far. 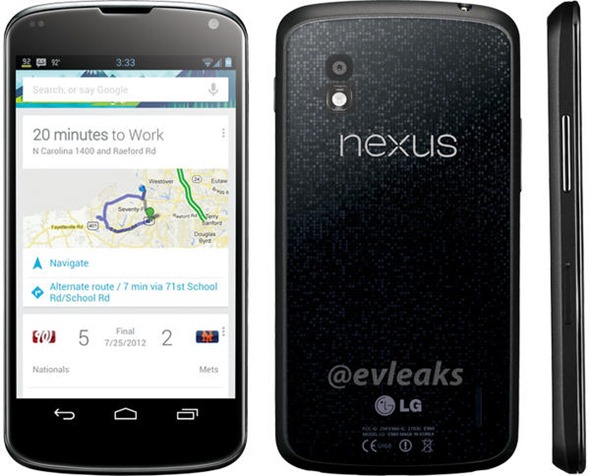 The hotly anticipated smartphone is expected to be announced at the Google event on October 29th as part of an overhauled “Nexus Certification Program” which will allow third-party smartphone manufacturers to launch their own “Nexus Certified” smartphones that will come with stock Android, and meet certain hardware requirements.

While there are rumors and reports pointing to Android 4.2 being announced at the event, leaked screenshots of the Settings > About menu on the Nexus 4 actually show it running Android 4.1.2; we’re not sure who to believe.

In any case, we’ll be covering the proceedings of the Google event on October 29th as they happen, so stay tuned to Redmond Pie!