A new video is attempting to show the differences between the old and new by comparing third-party cases for both the iPhone SE and iPhone 7 against iPhone 5s and iPhone 6s/6s Plus. The video takes the opportunity to establish if these particular cases – which have been supposedly manufactured from official design schematics – confirm or rule out some of the more prominent speculation points that we’ve been hearing about the two upcoming iOS devices.

The video starts with giving us an initial look at the third-party case that is supposedly intended for Apple’s upcoming 4-inch iPhone SE handset. Based on the rumors and speculations that we’ve been hearing about the potential design of the said device, it makes perfect sense to try and compare the case against Apple’s existing iPhone 5s. As expected, the iPhone 5s actually fits relatively well into the iPhone SE case, but it’s the volume buttons on the case that doesn’t quite align with the physical location of the buttons on the device itself. This could be due to Apple manufacturing the iPhone SE with a slightly more curved display like the current-generation models. 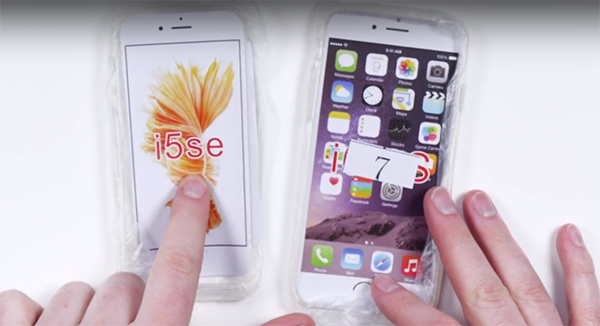 The iPhone 7 case is where a number of more prominent changes and differences start to appear. It’s been heavily rumored that Apple’s next major iPhone release later this year will come with a dual-lens camera system – which now seems exclusive to the iPhone 7 Plus – as well as the removal of the 3.5mm headphone jack. It’s also been suggested that the hardware will improve sound quality with an additional speaker dual-sound. The purported iPhone 7 case seems to confirm those suggestions, and comes with a much larger camera opening on the rear. There’s also a matching double speaker aperture that sit each side of the standard Lightning port aperture, and an extra opening at the bottom center of the case, hinting that Smart Connector port maybe coming to iPhone.

It’s going to be a busy few months for Apple. The company is expected to officially announce the iPhone SE at its “Let us loop you in” media event this coming March 21. The Cupertino-giant’s legal team then heads straight to a court in California to fight the ongoing encryption case against the FBI. The iPhone 7 and iPhone 7 Plus are expected to be announced during an event that will likely be held in September. It’s almost a given that we’ll see plenty more information leaks pertaining to the iPhone 7 before that happens.

For a closer look at the two cases and how they compare with the existing-gen iPhones, check out the video embedded below.