Android’s user interface is nice-looking, but it’s nothing outstanding. Thankfully, Android is an incredibly customizable operating system, making modifying it almost a must for power users. If you’ve been looking for a good alternative interface, Launcher 7 might be a good choice for you. It’s a port of Windows Phone 7’s look, with a few extra customization features that make this a must-try. 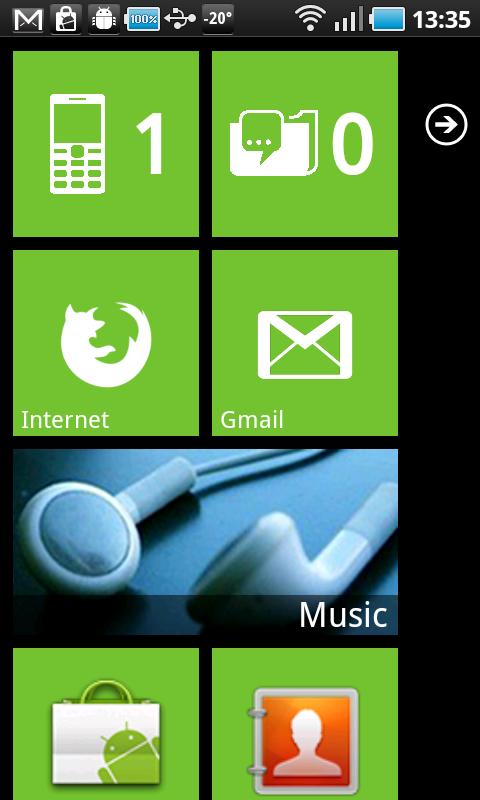 Custom launchers are nothing new for Android platform. If you think about it, most retail Android phone brands, such as HTC and Sony Galaxy, already ship with custom shells, sometimes completely locking the user out of the native user interface. But more importantly, there  are already quite a few other custom Android shells, such as Wave Launcher, which takes cues from the Palm WebOS design, and SPB Shell 3D, a more ambitious approach which attempts to give Android a 3D look.

Similarly to Windows Phone 7, Launcher 7 is based on tiles: constantly updating controls that bring information to the home screen, where it’s easier to see. While the real time component seems fairly crippled to me (although I haven’t used the app myself), users have the option to enclose actual widgets inside their own tiles, creating that way a more real-time experience. Having said that, standard widgets are likely to look far less then good inside a solid-color tile, unless a developer comes up with Launcher 7-specific widgets, in order to truly replicate Windows Phone 7’s real-time features. Apps you haven’t added to the home screen can be accessed through a drop down, similar to the “App Drawer” in Windows Phone 7.

Beneath the simple and smooth tiles, there are attractive customization options. Users are able to change basic things, like changing the color of the tiles or adding new ones; as well as more technical settings like disabling advanced transitions, which could negatively affect the performance on older or lower-end devices.

This custom interface comes in two versions: a free version, Launcher 7, which contains an ad in the app drawer, and a paid version, known as Launcher Pro, which will set you back $1.4 but it’s completely ad-free. I recommend you get the latter if you’re interested in supporting the developer, but either way, you should be able to put up with an ad on the app drawer.