It has been several years since the Xbox 360 released in a hail of glory, and with its life cycle now coming to an end, we’ve to contend with an almost weekly barrage of rumors and speculation with regards to its successor. According to the latest specs leak, the next-gen Xbox will be a real powerhouse, featuring an 8-core x64 CPU running at 1.6Ghz, 8GB of DDR3, USB 3.0 – get this – a 50GB 6x Blu-ray Disc drive. More (potentially outlandish) rumored specs after the jump!

These purported hardware specs arrive courtesy of Vgleaks (via Neowin), and as well as the x64 architecture, each CPU thread will supposedly have its own 32KB L1 instruction cache and 32KB L1 data cache. In terms of the GPU, this particular ‘specification’ points to a custom D3D11.1 class 800-MHz graphics processor featuring 12 shader cores for a total of 768 threads, and each thread will allegedly house the ability to “perform one scalar multiplication and addition operation (MADD) per clock cycle”. Furthermore, at peak performance, the GPU “can effectively issue 1.2 trillion floating-point operations per second.”

The 8GB or DDR3 RAM will be coupled with 32MB of fast embedded SRAM, while a 50 GB 6x Blu-ray drive will be a significant step up from the current console, which can only play DVDs. From a network perspective, we expect (regardless of these rumors) to see Gigabit Ethernet and Wi-Fi / Wi-Fi Direct, but the significant performance-specific upgrades will be music to the ears of those sick of playing on dated hardware.

To cap it all off, the leak suggest a built in NUI sensor will be present, allowing the Kinect system to be essentially built-in, as opposed to its current state as a peripheral. This will have a knock-on effect with what developers can do with the titles, since they will all be able to take advantage of the motion-based technologies without making provisions for those without the Kinect. 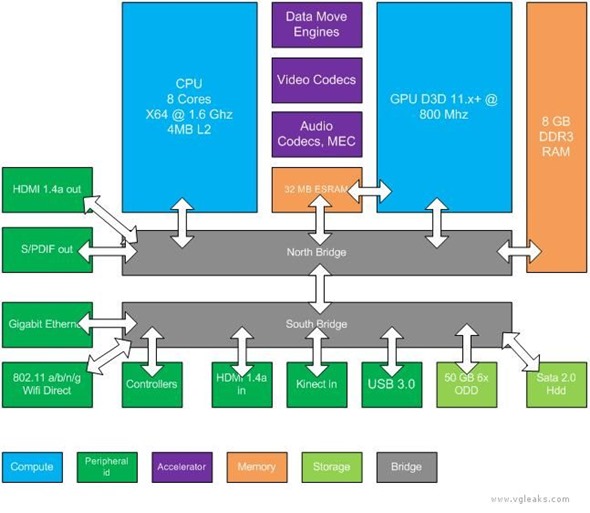 There’s also a mention of an HDMI-in connection, which is a particular eyebrow-raiser, and should we see some corroborating reports to back this leak up, we could certainly speculate and prove this feature further. At present, though, we’re taking this one with the proverbial pinch of salt.