Like so many other companies, Apple relies on the festive season to be one of their most lucrative financial periods during the year, and the chances are high that people all over the world will be waking up to an iPad, iPhone, Apple TV or some other fantastic Apple gift. If the magic of the present isn’t enough, iSimon – the digital sleight-of-hand magician – is back to bring some festive trickery into our lives.

A lot of us will probably have come across iSimon before. Although he isn’t like a traditional card carrying magician, or one who regularly pulls rabbits out of top-hats, he does manage to bring an almost seamless combination of sleight-of-hand trickery mixed with his mysterious weapon of choice; the iPad. iSimon has been seen around the internet performing iPad based illusions for Halloween, as well as during a video preview of iOS 5 before it was officially launched. This time around he is back to show us just what is possible with the iPad, the festive spirit and a little bit of magical imagination. 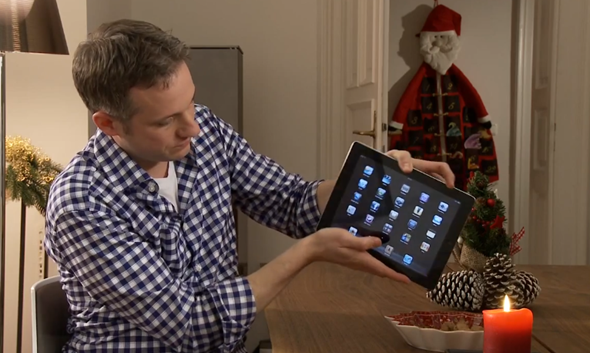 In true Advent fashion, iSimon has been performing a trick a day in the run up to Mr. Claus’ coming, which not only demonstrate what is possible with an iPad when you are a talented sleight-of-hand illusionist, but also providing some extremely appreciated festive hints along the way. The video contains a collection of twenty-four iPad based tricks that have been carried out from the beginning of December as part of his Appvent Calendar demonstrations and features tricks that are simple and intriguing as well as out-of-this-world confusing.

For those who are intrigued by this sort of thing, then you can watch the full playlist of twenty-four videos in which Simon performs such tasks, such as plucking a tennis ball from a pile of gifts on the iPad screen into reality, blowing Santa’s beard out of place through the iPad’s display as well as lighting a few candles in aid of the Christmas spirit before making them magically appear within the iPad itself. Sleight-of-hand, an Apple iPad and some good old-fashioned video editing make this a magical Christmas video that needs to be watched.