Keynote Video Of The New iPad Special Event Now Available Online, Here’s How To Watch It!

Apple’s special media event today has left us with much to discuss – namely the introduction of the brand-new, Retina-bearing iPad, which is set to be released to consumers next week in Europe and the United States.

Since Apple doesn’t actually offer live feeds of the event, many of us will have relied on streams and live blogs in order to catch wind of the breaking news. With the new products now out in the open, though, Apple has now posted a video of the entire event for everyone to see.

The event is about 90 minutes long, and if you want to see what happened, as it happened, then simply head over to this link. 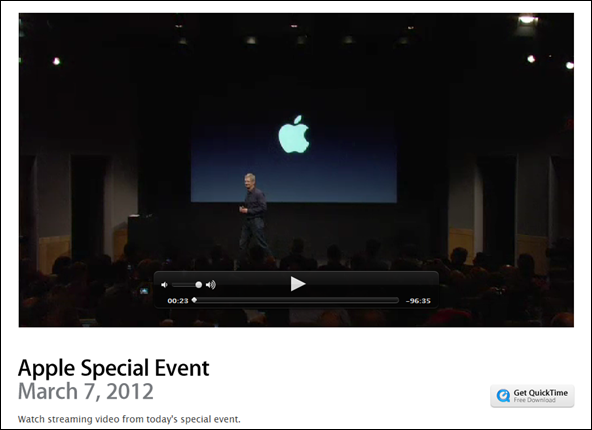 As a brief overview for those looking for the key details, the event starts by talking numbers, with the usual dose of superlatives and vanity delivered predominantly by Tim Cook, with interludes from Eddy Cue and Phil Schiller.

The updated iOS 5.1 with support for Japanese Siri is briefly discussed, and the new Apple TV also gets a mention, with 1080p playback being its clinching feature.

Then of course, the main event – the "New iPad". Yes, not iPad 3 or iPad HD at the moment, Apple has kept the on looking tech world guessing by seeming not to actually give it a name. Still, why should anyone care about such a minor detail when the device packs in an A5X quad-core chipset, Retina display, 4G LTE chip and 5 mega-pixel camera?

The exhibition then continues by showing just how impressive some of the new features are, before noting that the by-then somewhat downtrodden iPad 2 would be dropping $100, to $399 for the 16GB Wi-Fi model. Still, it’s a great price for what will likely still be the second-best tablet on the market.

All in all, the event went without a hitch, and the on looking crowd’s applause and commotion suggest they were indeed impressed with Apple’s new products – as are we here at Redmond Pie.

What did you, our wonderful army of readers, think about today’s events? Will you be getting that delicious new iPad? Will the new updates finally make you pledge your allegiance to Apple TV? We have ongoing discussion forums here for Google+ and here for Facebook, so please let us know of your take on today’s events.