JOYSTICK-IT: A Physical Joystick For Your iPad Or Android Tablet [VIDEO]

ThinkGeek, maker of several other geek toys of varied usefulness, has released a new attachable joystick for the iPad or Android tablets. By attaching to the glass, it will work with any game with any graphical control pad (such as many of the iOS versions of Pac-Man that are out there).

We all know how pesky pressing small controls on a touch screen can be, when games don’t support the iPad’s built-in accelerometer and is too elaborate to work with other touch controls. With JOYSTICK-IT, you’ll have a familiar interface that will do the pressing for you. Installing the add-on is as simple as pressing it down on your device’s screen on top of the game’s controls. You can then move it around or remove it when you wish by simply pulling it out, without causing any damage to your device. Indeed, this patent-pending device will make gaming a lot easier:

Bring your tablet-based gaming to the next level with the JOYSTICK-IT Tablet Arcade Stick. The JOYSTICK-IT gives you a real physical joystick for increased precision with touchscreen based games.

Although this accessory is marketed specifically at iPads and Android tablets, it can work on any reasonably sized capacitive touch-screen device, including smartphones, although their size could affect playability. As detailed by this product’s product page, it will work on any game with a basic virtual control pad of some kind, but not on games with advanced controls:

The JOYSTICK-IT will work with any game that features a virtual on-screen control pad of some kind. Games that use swiping, swipe-style joypads, joypads with variable on-screen locations, or complex finger based gestures will not work properly with the JOYSTICK-IT.

ThinkGeek is a nerd sanctuary for cool things. It sells basic geek-themed goods like shirts, hoodies and Android plush robots; as well as more elaborate ones such as an add-on flip-out keyboard for the iPhone and an iPod speaker that looks like a lego brick.

This add-on is available for $24.99, and for $39.99 you’ll get two joysticks instead of one, which is useful for some games that have controls on both sides of the screen: 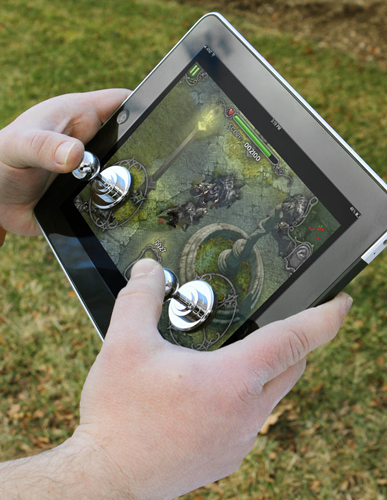 Check out the JOYSTICK-IT in action: