It’s an entertaining cat-and-mouse story – particularly when the jailbreak community has pulled off a universal untethered jailbreak – and yet again, the Evad3rs team has come up with the goods for the just-dropped iOS 6.1.1. Released hurriedly to fix cellular issues pertaining to the iPhone 4S, the Evasi0n jailbreak tool has been updated to deliver the same untethered jailbreak as for iOS 6.0-6.1 on iOS 6.1.1.

As it emerged rather soon following its release, iOS 6.1 was causing some iPhone 4S users grief in relation to cellular performance, but Apple has been fairly prompt in releasing a remedy, and the 23MB update should spell an end to any such issues. As an iPhone 4S user myself, I found that my usually stable signal was flat lining on a regular basis, but having just moved to iOS 6.1.1, all seems well thus far.

A tweet sent out earlier by respected jailbreak developer and Evad3rs team member Planetbeing confirmed what we’d all been hoping was the case – that Apple had not prevented the jailbreak with iOS 6.1.1, and also, that an update to Evasi0n was imminent. Well now, that update has been released as promised, taking Evasi0n to version number 1.3, and the jailbreaking process is, thankfully, just as simple as it was before.

Apple usually responds with an iOS release which patches exploits used for the purpose of a jailbreak, but such was the timing of the Evasi0n tool, it’s likely the Cupertino company has not yet had the time or resources to create, test and release an update. Of course, that day will soon be arriving – and for all devices, so please ensure you do not update your device to any future firmware until a reputable developer states otherwise. That is, if you wish to retain your jailbreak. 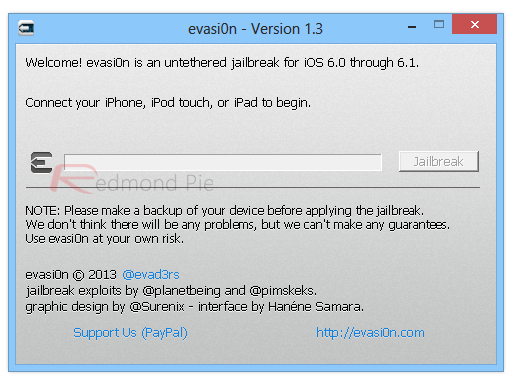 For those on iOS 6.1.1, the updated tool is now ready to download for Windows, Mac and Linux users. Most of the bugs present in the initial Evasi0n release seem to have been ironed out, but if you do spot any, be sure to report them to the Evad3rs team so they can be dealt with accordingly. If you require a step-by-step walkthrough, here’s how simple it is:

Step 2: Download iOS 6.1.1 for iPhone 4S. Update your device to 6.1.1 via iTunes. DO NOT update via OTA as it might cause issues with jailbreak.