The release of a new major version of Apple’s mobile operating system always brings with it a fair amount of uncertainty for those individuals who prefer their Apple mobile experience to have a jailbroken slant on it. Firmware point upgrades often represent minimal change and are often used by Apple as an attempt to close certain holes in the firmware that have been used by the jailbreak development teams to bypass their security in the previous iOS version. In most circumstances it generally doesn’t take that long to produce and release a jailbreak for a mid-range firmware upgrade.

Updating to a whole new version is an entirely different story and usually brings a large number of internal changes as Apple change the way the operating system works and add/remove parts of the underlying code that makes it tick.

Apple released iOS 6 GM earlier today at the iPhone 5 special media event held in Yerba Buena Center for the Arts in SF. MuscleNerd of iPhone Dev-Team has updated Redsn0w 0.9.13 to support today’s GM seed for tethered jailbreak on iPhone 4, 3GS, and iPod touch 4. Considering the GM version of a new release of iOS generally tends to be the final build that eventually goes live to the public and ships with new hardware, it is feasible to assume that iOS 6.0 will be jailbreakable from the get-go, but only on the older generation limera1nable A4-based devices, namely: iPhone 4, iPhone 3GS, and iPod touch 4 – and that too tethered.

It is important to note that this tethered jailbreak wont install Cydia yet. It will only give you root access which will enable you to install the custom packages of your choice using SSH. So yes, until and unless you are a advanced user or a developer, it is better to stay away from this jailbreak until Cydia is fully compatible to work with iOS 6, we will obviously let you know whenever it is.

1. Download iOS 6 GM and restore your device to it via the latest version of iTunes.

3. Start Redsn0w, select ‘Extras‘ from the main interface followed by the ‘Select IPSW‘ option. Point it to iOS 6 GM firmware. 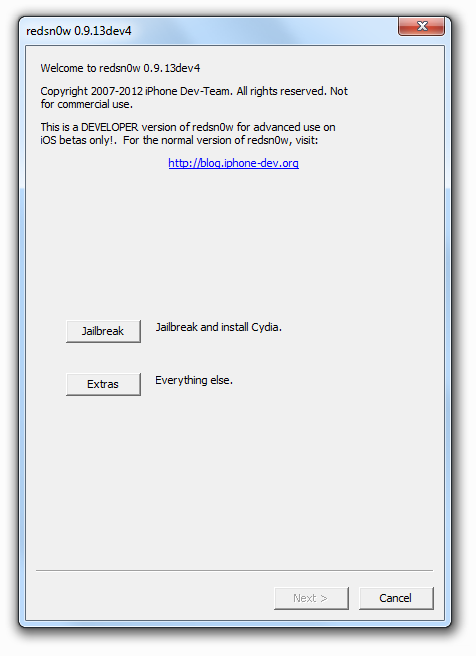 4. Now from the main screen, select ‘Jailbreak” option to start the process. Redsn0w will present you with onscreen instructions on how to enter your device into DFU mode. Follow the steps carefully. Once the device is in DFU mode, the jailbreaking procedure will automatically start. Once done, your device will be rebooted into a jailbroken state.

Since this is a tethered jailbreak, you will need to enter tethered boot mode using Redsn0w every time your device restarts. To do this, start Redsn0w, click on the "Extras" button on screen and then simply click on "Just Boot" option and follow the on-screen instructions.

With every new major release of their mobile OS, Apple seem to be implementing features that have previously only been found through releases on the jailbroken Cydia store. With iOS 6 representing one of the largest changes to the software that we have seen in recent times, it will be extremely interesting to see what popular Cydia packages have been sherlocked by the release but even more interesting to see what packages and enhancements the jailbreak development community come up with for iOS 6.