Comex’s Untethered Jailbreak Is Going To Be Released After Apple Releases iOS 4.3 Firmware?

Yes you read that right ! An Italian site contacted Comex of Spirit and JailbreakMe fame to ask him about whether or not he is going to release his untethered jailbreak tool for iOS 4.2.1. Comex’s reply was swift and simple, à la Steve Jobs. He is going to wait for Apple to release the next firmware update to public before releasing his tool. 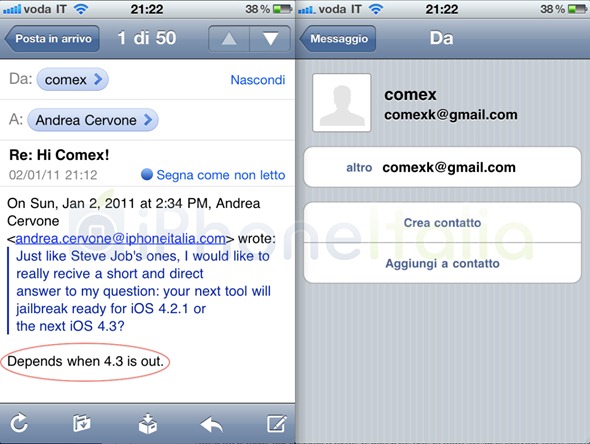 Just like Steve Job’s ones, I would like to really receive a short and direct answer to my question: your next tool will jailbreak ready for iOS 4.2.1 or the next iOS 4.3?

The email address of Comex as shown in the screenshot above seems authentic as he posted the same address publicly in a reply to a user on his Twitter account.

Comex untethered jailbreak tool will be released only after Apple releases iOS 4.3 or 4.2.2, whichever they decide to before the major iOS 5.0 release in June this year. [Thanks iDarkman for the hat tip]