Much discussion surrounding Apple’s ecosystem lately has been about them cutting the cord to the computer through iCloud. However, iTunes remains an important product that some may still need to use (or want to, if they haven’t gone entirely to the cloud). And, with that being said, 9to5Mac are hearing from some sources close to Apple that the company has begun seeding iTunes 11 – the next major release of the software – internally.

So, what’s new thus far in these very early builds? 9to5Mac notes that the current focus of iTunes 11 is with under-the-hood software changes rather than aesthetic and functionality changes (hopefully iTunes will be more stable now, especially on Windows). They do note though that different parts of the software are developed by different groups separately, so it’s likely that newer builds and the final product may have at least a few changes that can be visually noticed. 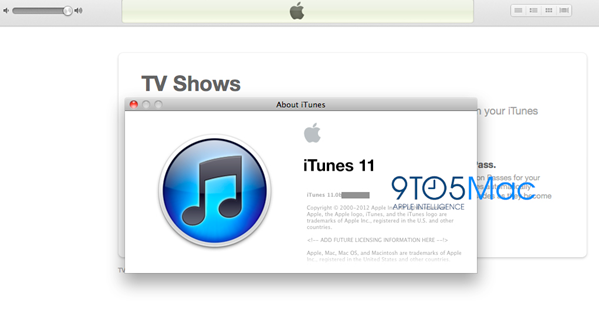 So, apart from iOS 6 support, what’s new in iTunes 11? Tighter integration with iCloud is expected. There’s a dedicated settings area just for iCloud within iTunes, which will be an "always accessible spot" for users to change iCloud settings within iTunes on the desktop. Good stuff, I suppose, if you still use iTunes. I haven’t synced my device with iTunes ever since iCloud came out and offered both OTA updates and backup/restore functionality, and I’m sure that gradually, more and more Apple users are doing the same. I never found using iTunes to be a pleasant experience, and the seamlessness of iCloud is just perfect.

In conclusion, 9to5Mac is also hearing that a revamp of the iTunes Store and App Store is imminent and set to launch sometime between summer and fall of this year. Apple did recently acquire a company called Chomp, which is a service that helps you find apps in a very intuitive and user-friendly manner, so it’s possible that the resources gained from the acquisition will be put towards the revamp.