Apple has today announced that its “epic” 12.9-inch iPad Pro will be available to order via its online store this coming Wednesday. The tablet, which was originally introduced as part of the company’s iPhone-centric media event back in September, will be available to order directly from Apple.com come November 11, and will start to show up on physical shelves throughout the company’s network of retail outlets by the end of the week. Official Apple Authorized Resellers and select carrier partners will also be stocking the new iPad come the end of the week.

Apple’s official press release on the subject brings the news that professionals have been waiting for. It becomes immediately apparent that while the iPad Pro will undoubtedly have a far reaching appeal, it will predominantly speak to those who require a professionally tailored device for their day-to-day work-based activities. The existence of the Apple Pencil and the new Smart Keyboard further enhance the iPad Pro’s growing reputation as a “must have” tool for forward-thinking enterprises. Both of those accessories, along with the device itself, will be available this week in over 40 countries, including China & Japan. 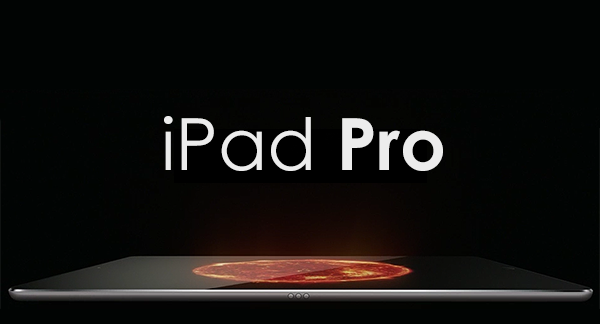 The early response to iPad Pro from app developers and our customers has been incredible, and we’re excited to get iPad Pro into the hands of customers around the world this week. iPad Pro is the most powerful iPad we’ve ever made, giving users the ability to be even more creative and more productive with the epic 12.9-inch Retina display, powerful 64-bit A9X chip and groundbreaking Apple Pencil and new Smart Keyboard. We can’t wait to see what they do with iPad Pro.

Apple has already employed the services of the Disney Pixar professional animation team to showcase the capabilities of the new iPad Pro and Apple Pencil as part of the run up to this release. Those opting to purchase the new iPad Pro this coming Wednesday will receive a 12.9-inch tablet that’s powered by Apple’s own 64-bit A9X processor. Prices for the new hardware will start at $799 for the 32GB Wi-Fi only model, rising to $1079 for the 128GB Wi-Fi + Cellular.

Complete details on availability and pricing of the 12.9-inch tablet can be seen below: 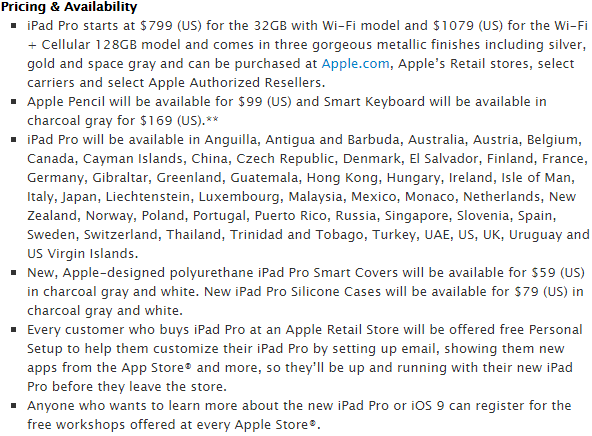