Is This The New Kindle Fire? [IMAGE]

The tablet computing space is one of the most hotly contested industries at the moment, with the success of the iPad proving just how lucrative that particular marketplace can be for companies. Since the launch of the iPad, we’ve seen many contenders to the throne that have come in all shapes and sizes, running varying operating systems and priced at different points, but nothing has really come close to dominating the space like the iPad has over the last three generations.

One of the more successful Android tablets that we have seen in recent times is the Amazon Kindle Fire, and for those who are a little disappointed that it has sold out, there may be some good news on the horizon as we just been treated to what is rumored to be Amazon’s new Kindle Fire tablet. It must be stressed at this point that there is no official word that the image is of the new Kindle device, but if it is, then it has to go down as a must-try-harder for Amazon.

Accompanying the image is the speculation that Amazon is planning on releasing two new Kindle Fires, one being a more compact 7-inch version and the secondary unit coming, in a 10-inch flavor, more than likely in an attempt to give the iPad some much needed competition. The industry is still full of conjecture about a possible iPad Mini, something that would mean both companies would effectively be competing for exactly the same consumers. It’s unknown whether Amazon is planning to introduce both size variants at the same time or go down the route of a staggered release. 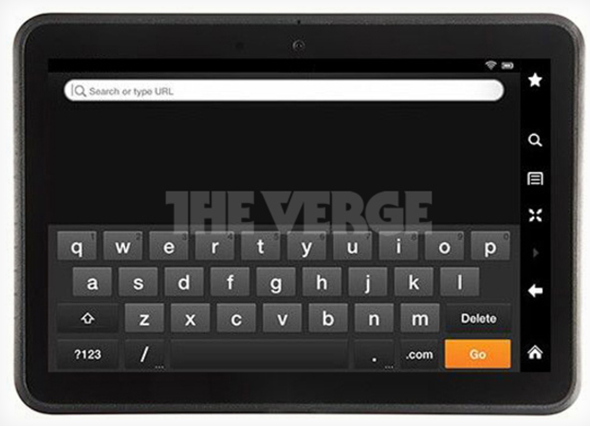 Although we can’t really tell a great deal from the leaked image, it is plainly obvious that not a great deal of time and effort has been placed in designing an attractive and unique exterior. The device looks like an extremely plain black slab with the expected bezel surrounding it. Aside from the external aesthetics, we don’t really know a great deal about the device, as we only have a one angled view of it, which is the front. Users who are potentially interested in getting their hands on a new Kindle Fire will be extremely interested to see what pricing point Amazon will introduce the tablet with, but the rest of us are eagerly awaiting for official confirmation and seeing what’s under the hood.