iPhone Was The Most Popular Camera On Flickr In 2015

Flickr has recently released its annual “Year in Review” report, which compiles together a bunch of statistics that have been pulled from activity on the photo-sharing network over the last twelve months. Everything from the most popular color trends, to which members received the most likes on their uploaded photos, as well as the popularity of the cameras that were used to capture those uploaded image files. The review makes for an interesting reading across the board, but will be particularly satisfying to Apple considering the iPhone is listed as being the most popular camera device on Flickr during 2015.

Apple continually plays on the fact that the iPhone is a fantastic piece of kit for taking photographs. Every iteration of iPhone comes with an improvement to the camera experience, which could be due to hardware improvements in the embedded module, or software tinkering that is designed to get the most out of the captured image. Flickr’s Year in Review report analysis the EXIF data of uploads to the site and shows that a whopping 42% of photos beamed across to its servers were captured using one of Apple’s smartphones. 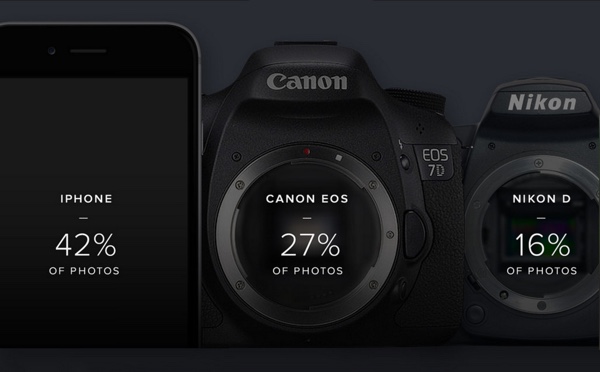 The Canon EOS took second place with a 27% share of uploaded images, with the Nikon D holding onto third place with a 16% share. It’s quite telling that the top three devices, of which only one is a smartphone, account for 85% of the total uploads to Flickr during the last twelve months. The additional granularity published at flickr.com/cameras suggests that the iPhone 6 and iPhone 5s were the most popular Apple devices used during the year. With the iPhone 6 Plus and iPhone 5 also making an appearance in the chart. There’s also room for Samsung’s Galaxy S5 in those rankings, but not enough images were captured and uploaded with that particular device to make it into the top three devices used in the main report. 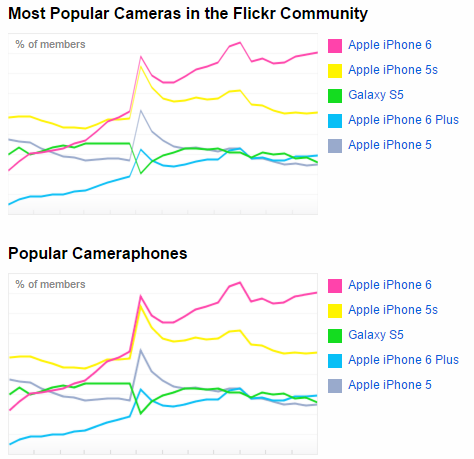 It’s also extremely interesting to note that the most popular device type for capturing and uploading images to the network was a camera phone, accounting for 39%. Additional titbits from the report include dark lime green, sky blue and ocean blue being the most popular color palettes during spring. There’s also a little photographer spotlight feature for Boston based Joe St. Pierre who received the most views and likes during 2015 and states that “Flickr has been an important part of my photographic journey”.