In case you missed all the action which happened earlier today, here is a complete video from the iPhone OS 4 event which also includes Steve Jobs keynote. The said video is available in QuickTime and MPEG-4 format and can be seen from the link given below. 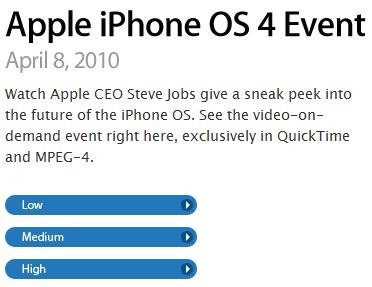 To recap on what happened, Apple today announced iPhone OS 4 which brings more than 100 new features and over 1500 new APIs for both users and developers respectively. iPhone OS 4 is fully supported on iPhone 3GS and iPod touch 3G. iPhone 3G and iPod touch 2G will run most of the things except for multitasking. An iPad version of iPhone OS 4 is expected to be released this fall.