The ‘Battle of the Sixes’ report has been published by and it makes for some interesting reading. GameBench created the report as an opportunity to create the “first objective comparison of the Apple iPhone 6 and the Samsung Galaxy S6 on the basis of real-world gaming performance.” Put simply, if you’re heavily into high-end mobile gaming on your smartphone, are you better off investing in Apple’s iPhone 6 or Samsung’s Galaxy S6? It seems that last year’s iPhone 6 is still capable of edging out this year’s competition by a good 10% “average lead.”

The team was able to put together a reasonably scientific test of performance when running high-end games on each device by utilizing the iOS version of GameBench as well as the Android variant. The battle looked to test the same criteria across both devices across ten high-end games available on both platforms. Games in the test included Grand Theft Auto: San Andreas, Marvel: Contest of Champions, and the beautifully crafted Monument Valley. 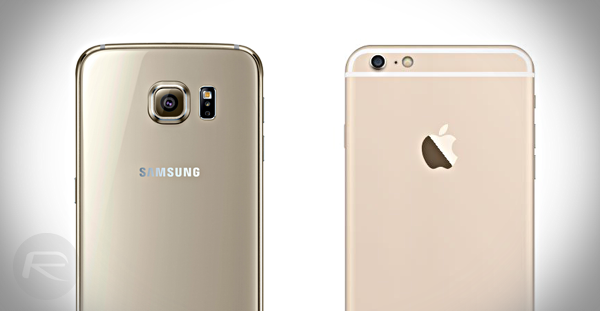 GameBench also included the Nexus 6 and HTC One M9 as a method of comparison. Overall, the tests clearly indicated that last year’s Apple iPhone 6 offered the better Performance Summary. The attached visuals show that Apple’s current flagship offered the best overall Median FPS and Minimum FPS when compared against the other three test devices. Samsung’s Galaxy S6 was the clear runner-up with the HTC One M9 following closely behind. Motorola’s Nexus 6 matched the HTC One M9 in terms of Media FPS performance but fell slightly behind in Minimum FPS results.

The GameBench Stability Summary also puts Apple’s iPhone 6 ahead of the competing pack. In fact, the results show that all four devices rank in the same order as the Performance Summary with the Galaxy S6 being a close runner-up, followed closely by the HTC One M9, and the Motorola Nexus 6 acting as the foundation for the devices above it. Of course, this is intended to be a “real-world” test on how the games perform on the devices that we have in our hands. The test doesn’t legislate for the fact that games are run at different resolutions on the different devices. It also doesn’t take into account the possibility that each game could be better optimized on one platform than the offer giving the illusion of better hardware performance. 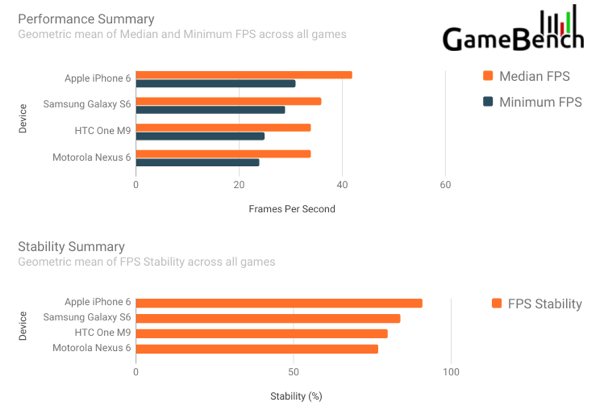