Apple’s iPhone 5S launch is mere hours away now, and with the excitement and anticipation going up the roof as we count down the hours, it appears that the leaks are still not going to stop. Just now, a new image has surfaced over the internet, allegedly showing a page from the iPhone 5S quick start guide which refers to the trademark Home button on the iPhone as “Home Button/Touch ID sensor”. Details past the break.

The leaked image is somewhat in line with what we’ve seen in the recent rumors surrounding the iPhone 5S fingerprint sensor. If the source is to be believed, it would appear that the latest and greatest iPhone iteration would bring a new and radical security measure in the form of fingerprint security, allowing users to ensure that no one aside from them (or an authorized user) can access their device. 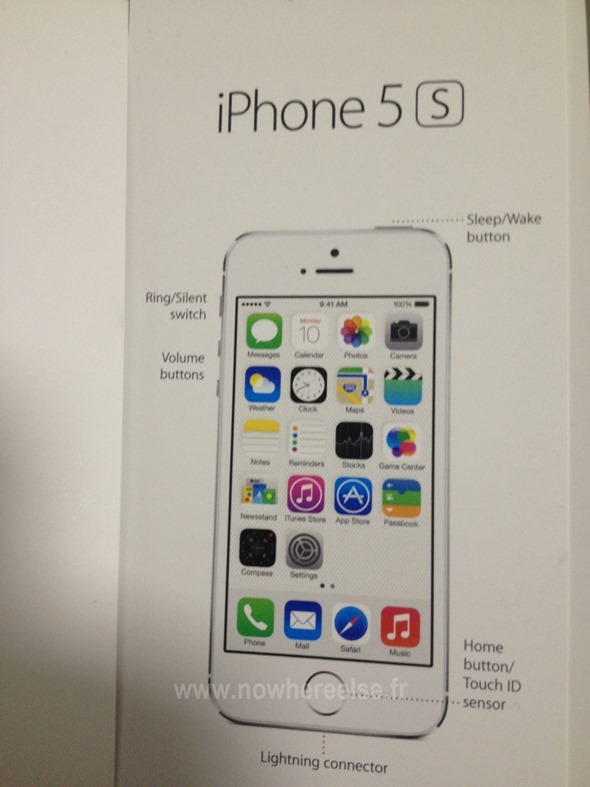 We say “if” because the validity of the leak cannot be verified, and also the fact that the leaked page from the quick start guide uses terminology such as “Ring/Silent switch” and “Volume buttons” as opposed to the fruit company’s conventional “Volume Up/Down” and “Ring/Silent” from quick start guides of the previous iPhone iterations.

The leak also suggests that the biometric identity features will be embedded at a hardware level in the Home button hardware, which goes in line with the Cupertino company’s last-year acquisition of AuthenTec, a biometric security firm that is allegedly providing the hardware and the technology behind it. It’s also believed that unlike traditional swipe to scan fingerprint sensing mechanisms, which we find usually on laptops, Apple’s version would be a static sensor, which will allow users to just place their thumb (or finger) on the Home button and have the software match the print and register it. It is definitely more convenient, and allows for a natural use of the phone without treating the Home button as you would the capacitive buttons on certain Android phones.

Should the rumors be true (which we’ll find out in just a few hours), Apple will take another innovative leap in smartphone technology by providing biometric security in its devices. Judging by the fact that these rumors have been around for a while now, and the fact that Apple did acquire AuthecTec in 2012, it might not be too much of a stretch to believe them. Still, only a few more hours to go, so let’s see how this turns around to be.