We hear of many unfortunate incidents where people come to harm or property is damaged when tech products spontaneously combust, but very rarely does it happen to Apple gadgets. Unfortunately, one 14-year-old girl discovered that the perceived safety and quality assurance that comes with the bitten-apple logo isn’t an exact science, as the loud pop of her pocketed iPhone 5c, followed by smoke billowing from her trousers, dramatically proved. Luckily, the student was unharmed.

With enough initiative to stop, drop and roll, she suffered only minor injuries, but there are many situations where this could have been a lot worse. Had it happened while she was asleep, for example, then her life may well have been in danger, and even though she was left with slight burns, she was still feeling well enough to request that she returned to school – something the medical officials duly declined. 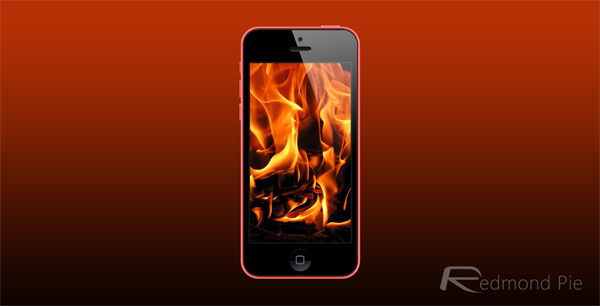 It’s extremely uncommon for this to happen to a product from Apple, or indeed, any of the major companies that have rigorous safety checks. Often, a knock-off charger or battery is to blame for these incidents, but as noted by Andrew Rosenstein, a repair store owner close-by the girl’s school in Kennebunk, Maine, these things can still happen in any device where lithium-ion batteries are concerned.

He did go on to stress that such incidents are incredibly rare, and that the batteries installed within Apple products in particular are “extremely safe.”

It’s also worth noting that the device was in the girl’s back pocket, and the popping noise only occurred when she sat down. Thus, she may well have inadvertently shorted the device and caused the smoke and searing heat.

This doesn’t make the situation any better, of course, but in a sense, it should encourage those following the story to avoid sitting on their devices by placing them in the back pocket. Because if your device isn’t the one-off that will go up in flames, there’s certainly a good chance that you’ll pierce the LCD, rupture the display, or cause some other lasting damage.

On an ending note, regardless of any device you’re using, it’s better to take necessary precautions when handling gadgets. It’s better to be safe than sorry.