If the rumors were not frantic enough before Apple announced the impending iPhone event, then they’re really going to take off the closer we get to October 4th. The latest rumor to start doing the rounds comes after Japanese blog Macotakara reported that a China Unicom executive apparently confirmed that the next generation iPhone, labeled the iPhone 5, will support HSPA+. 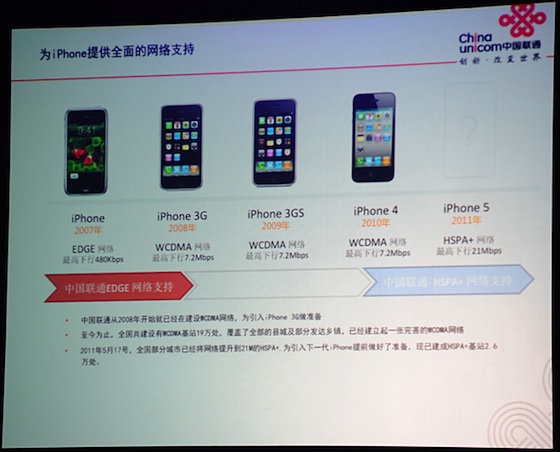 HSPA+, while not quite 4G, and often dubbed 3.5G by those using it, offers a theoretical download speed of 21 Mbps, up from the current limit of 7.2Mbps. It’s worth remembering that those two numbers are very much a best case scenario – don’t be expecting speeds quite that fast!

The China Unicom executive let the information slip on a slide during a presentation at Macworld Asia, with PC Watch managing to get a sneaky photograph of it.

Of course, that is far from a guarantee that we’ll be seeing high speed network access in the iPhone 5, especially given Apple’s reluctance to move to standards that aren’t fully developed. The original iPhone, released back in 2007, didn’t ship with 3G capabilities, even though most phones from other manufacturers already did. The company cited an underdeveloped 3G network in the United States as the reason for their hesitance, and many pundits believe the same reason is keeping Apple from making the jump to 4G. With HSPA+ very much a stopgap between 3G and 4G, would Apple really bother with it?

There is another reason we can’t see Apple using HSPA+, and that’s carrier parity. As things stand, Apple’s two US carrier partners have the same iPhone, bar the obvious differences in radios. Given the differences in both AT&T and Verizon’s networks, a move to HSPA+ would effectively give the former an advantage over the latter, with AT&T having used HSPA+ as its ‘faux-4G’ in lieu of making the push to LTE 4G. Verizon on the other hand supports LTE, and not HSPA+. Would Apple want to give one partner a very real advantage over another? We’re not so sure.

So, what it all boils down to is this: we’d recommend a good chunk of salt be taken with this rumor, but we’d love to be wrong.

We’ll find out come the 4th, won’t we? Stay tuned and we’ll cover all the announcements as they happen on said day.