As with the leaked info post regarding upcoming Apple accessories we brought you earlier, there’ll likely be quite a few general reports during the next couple of hours leading up to the beginning of the event, and in our latest roundup of intelligence regarding today’s special keynote gathering, it looks as though the iPhone 5 name seems a dead certainty.

A search for “iPhone-5” on Apple’s website reveals a document from the Cupertino’s press release section entitled “Apple introduces iPhone 5,” and although the feint “5” shown on the invitations to the event was seen by some as an elaborate ploy to fool us, it would appear the sixth-generation device will indeed be called the iPhone 5.

The page in question cannot currently be found, although once the keynote speech commences and Cook, Forstall et al have said their piece, it’s more than likely said page will be available, with full press notes regarding the iPhone 5. 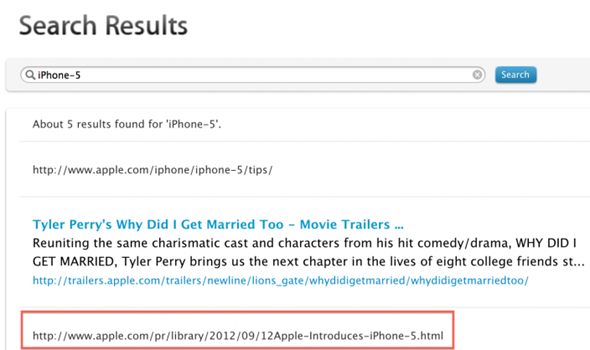 As well as the sort-of-official name confirmation, Apple’s search engine has also revealed a new iPod touch and iPod nano as arriving today, and the fact we’ve less clue about what each device will look like means the refresh of those classic Apple gadgets will also be worth looking out for.

Whenever a new batch of iDevices are unveiled, the associated software is usually released contemporaneously, and although we already know iOS 6 is heading our way today, the search engine has suggested iTunes 11 will also be arriving today. With the iPad Mini expected sometime in October, nobody seemed sure whether the center of every iDevice’s known universe would be updated this month or next, but we can now expect Apple to release iTunes 11 in a couple of hours.

Finally, if confirmation was ever needed, the search engine also shows LTE connectivity as being a feature of the iPhone 5. Apple has been, as it often is, rather slow in adopting LTE, but with the third-gen iPad offering the improved radio, it always looked like Apple would implement LTE.

I hope you’re as excited as we are about this event, and we’ll keep you updated if any more details are uncovered before things kick off in just over two hours!