Although Apple is planning on taking to the Yerba Buena Center for the Arts tomorrow to hold their much anticipated press event, we can’t be exactly sure what they are going to announce. It’s pretty much nailed on that we will see the new iPhone appearing as well as some announcements surrounding the availability of iOS 6. But as yet, we don’t have any indication on whether Apple will make it all about the iPhone or introduce some additional hardware such as the rumored miniature iPad or possibly a couple of new iPods. Thankfully we don’t have long to wait to find out.

Regardless of whether we see the new mini iPad tomorrow or have to wait until a secondary dedicated event in October, the case leaks and consistent speculation surrounding the purported device is enough to convince us that it actually exists and we will be seeing it in the very near future. If you happen to be one of those who simply can’t wait and needs to see and read about what could be offered by Apple, then a nice little photograph has emerged that puts cases for the various Apple devices side-by-side to give a decent indication of the size differences between each one.

The photograph comes courtesy of an Apple fan on Flickr and uses manufactured cases for each current and purported device to give us a visual insight into how each device will look next to the other. The image shows the currently available iPhone 4S and the 3rd-gen iPad, as well as the rumored iPad Mini and the soon to be announced sixth-generation iPhone. In the case of the latter two devices, the included cases have been produced by various manufacturers based on leaked specifications that we have seen in the months leading up to this event.

For those who have been having difficulty imagining just what a 7-inch iPad would be like, or how the elongation of the new iPhone display will affect the device, then the photograph does a pretty great job of letting that sink in when compared against the new iPad and iPhone 4S that we are all familiar with. The smaller iPad offers the largest difference when compared against its bigger brother, and although it maintains the same aspect ratio as the iPad 2, it will be thrust into a market to compete with the likes of the Nexus 7 and Amazon Kindle. 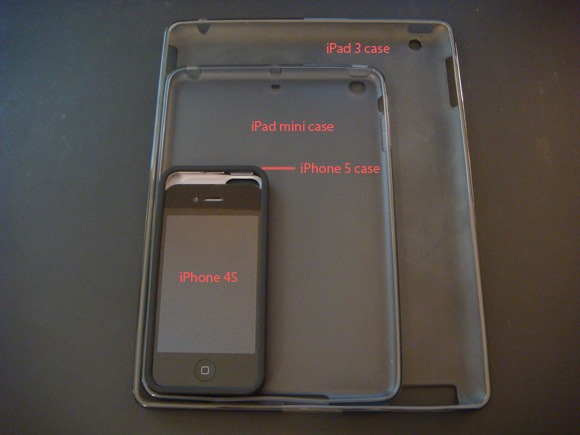 It’s rather interesting to see that the iPhone 5 cases fit rather snugly around the current iPhone 4S model. This fits in with widely accepted reports that Apple is planning on releasing a device that is the same width as previous model iPhones, but with an elongated display in the vertical dimension. With just over 24 hours to go until the event, all will become clear sooner rather than later.