It stands to reason that different iPhones have been capable of different cellular speeds over the years, as not only the phones themselves improve, but also the infrastructure that they are connected to.

Now a new study by OpenSignal has looked into the cellular performance of some of Apple’s most popular iPhones going all the way back to 2013. The results make for interesting reading, although none of them are particular unexpected.

As the numbers from OpenSignal show, the current crop of iPhone XS and iPhone XS Max handsets are roughly twice as fast as iPhones from a few years ago, specifically the iPhone 5s, iPhone 6, and iPhone 6s. It’s also clear from the numbers that while there have been some big jumps, nothing really changed as far as speeds are concerned during 2015, 2016, and 2017. Those cover the iPhone 8 and iPhone 8 Plus backwards, through iPhone 6s and iPhone 6s Plus.

We do know that the current crop of iPhones have improved cellular speeds thanks to their new, upgraded antenna systems. These numbers show that in graph form when compared with older handsets.

The other good news here is that the most recent iPhones appear to match what Apple would suggest they are capable of, although the iPhone XR is slightly lower than the iPhone XS and iPhone XS Max, which may be something worth remembering when making a buying decision. 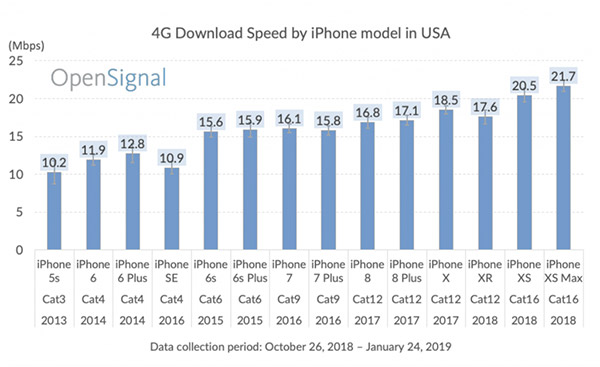 With the iPhone set to receive another refresh towards the end of this year, we’ll have to wait and see what is around the corner. Apple is unlikely to use 5G this time around, despite those 5GE logos that have started to appear on some iPhones of late. 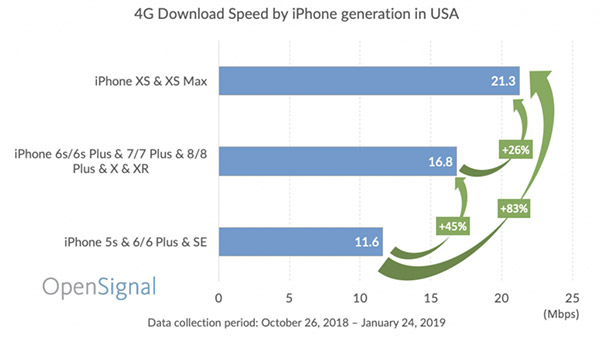