Back when iOS 4 was released, it had all sorts of performance issues when it ran on older devices such as iPhone 3G. Last month, Jobs confirmed that a new software update will fix some performance woes of iPhone 3G running iOS 4.x. Final GM Build of iOS 4.1 (developers only) was released this week for iPhone 4, 3GS, 3G and iPod touch and Lifehacker has a video up for us, comparing both iOS 4.0 and iOS 4.1 running on iPhone 3G. The difference is quite noticeable in some cases as can be seen in the video embedded below. 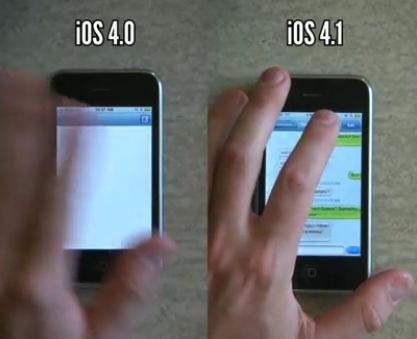 and finally, here is the video showing the speed test in action:

Video above clearly shows some performance improvement for iPhone 3G users. Although it is still not as fast or smooth as it is on iPhone 4 or even 3GS but that is mainly due to hardware limitation than the actual software. iOS 4.1 will be available for public download via iTunes starting from next week.