In the run-up to the announcement of the iPad Air 2, many were touting it as a powerhouse, and although Apple made a bit of a song and dance of its speed at last week’s event, the Geekbench results now back up these claims. As the title suggests, the A8X is a triple-core configuration clocked at 1.5GHz, and as well as that, Apple has also bundled in 2GB of RAM.

The mobile industry has been caught in a bit of a specs race over the past few years, and it is one that Apple has largely distanced itself from. While competitors have sought to impress with octa-core CPUs and, in some cases, 4GB of RAM, the Mac maker has gone the other way, seeking to refine what, on paper, would appear to be less power.

The A7 of yesteryear, which trickled out to the iPad Air, iPad mini 2 and iPhone 5s, was a 64-bit offering, and such was the manner in which Apple had applied it, that, for the most part, it kept up an even exceeded the performance of some apparently more powerful competitors.

Naturally, this year’s A8 processor has retained its 64-bit status, and with the iPhone 6 and iPhone 6 Plus seeing speed gains of 15% over the A7, has made a marked improvement. But whereas the first-gen iPad Air was rather similar to the Retina iPad mini internally, the iPad Air 2 packs a significantly meaner punch versus its smaller cousin.

The second-gen Air, which is, in fact, the sixth-gen iPad featuring that 9.7-inch display, has yet to be released to the public, but some Geekbench 3 test results offer an insight into its processing might. The A8X is a triple-core CPU which, as aforementioned, is clocked at 1.5GHz, and although a tri-core setup is rather unorthodox, it’s fair to say that it will render the iPad Air 2 significantly more powerful than its peers running iOS. 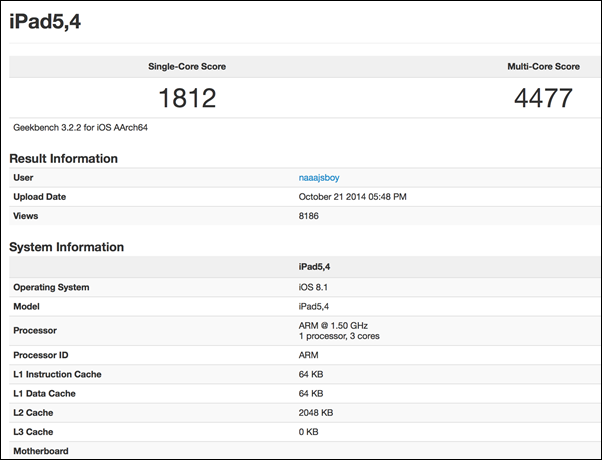 The 2GB of RAM is also a first, and it’s amazing to think that while we’re accustomed to at least 2 or 3GB of RAM in high-end smartphones and tablets, Apple’s mobile products have survived for so long on just the one.

Intriguingly, the single-core benchmarks reveal a slight increase over the iPhone 6 and iPhone 6 Plus, both of which are almost identically matched. Indeed, the extra 100MHz of clock speed will have played a significant role in this reading, and if you’re on the hunt for a tablet with sheer performance, the iPad Air 2 may be the one for you. 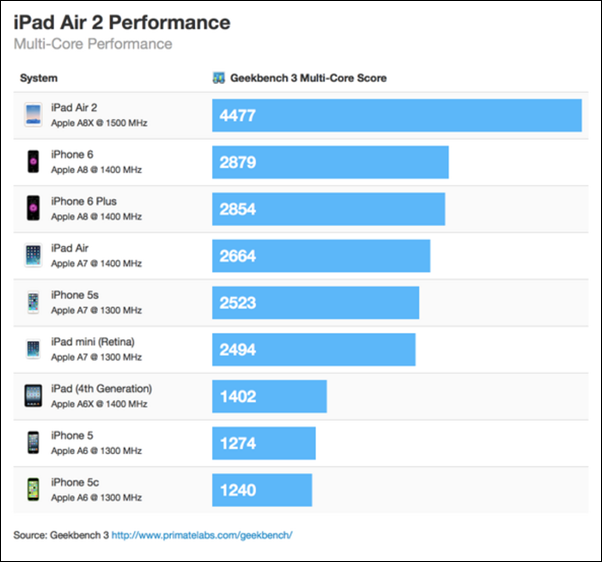 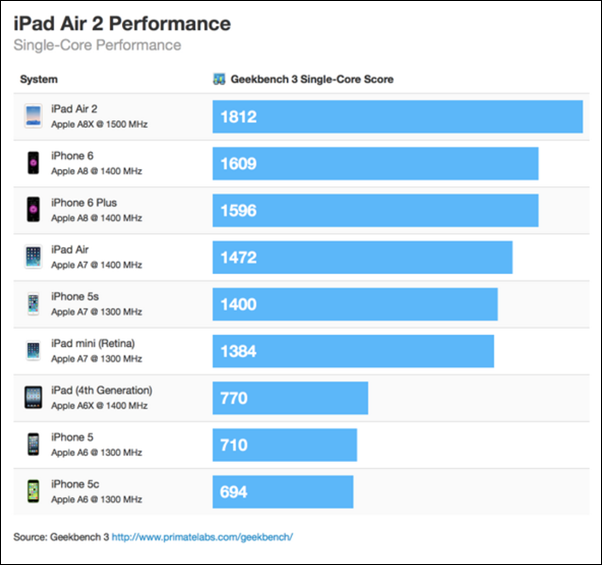 The multi-core benchmarks, for those interested, equate to a 55% bump over the new iPhone models, which includes the iPhone 6 and iPhone 6 Plus both, and 68% boost over the original iPad Air, so while it seems a near certainty that the next-gen Apple handset will also be treated to more RAM around this time next year, I’m sure many will be feeling a little disappointed that it didn’t happen this time around.