The introduction of iOS 9 brought with it a number of feature additions and much-longed for functionality improvements. Rather than reinventing the wheel and attempting to serve up a whole new set of core features, iOS 9 exists as more of a stepping stone for what is to come and attempts to stabilize its core offering with a number of stability improvements that should make the whole experience more pleasurable across all devices. iOS 9 does however, introduce one very impressive little feature that should make a difference to a lot of users – Low Power Mode, which is designed to save battery life by reducing the performance of the device and preventing consistent background activity.

It makes perfect sense that in order to save power, the requirement must be to prevent the device from performing certain network based activities that put a huge strain on the battery. Activities such as making backgrounded network calls to fetch email or refresh app content is prevented when Low Power Mode is turned on, but how does this new mode affect the overall performance of the iPhone? Does the pursuit of longer battery life render the device effectively unusable? Geekbench 3 has been updated to work with Apple’s iOS 9 and serves up some answers to those questions. 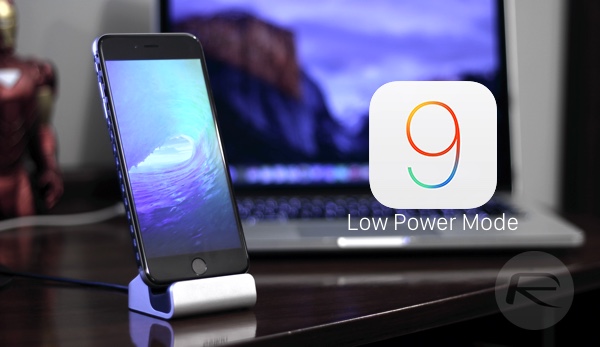 An iPhone 6 Plus with Low Power Mode off managed to notch up a score of 1606 when put through the single-core processor test. The multi-core test on the same device under the same conditions returned a score of 2891. In contrast, with Low Power Mode activated, the same device under the same conditions returned a single-core score of 1019 and a multi-core score of 1751. Those results seems to confirm Apple’s own description of Low Power mode in that there is a noticeable reduction of power being made available to certain aspects of the device in order to reserve as much battery life as possible. The same level of results were recorded when an iPhone 5s was put through similar tests. 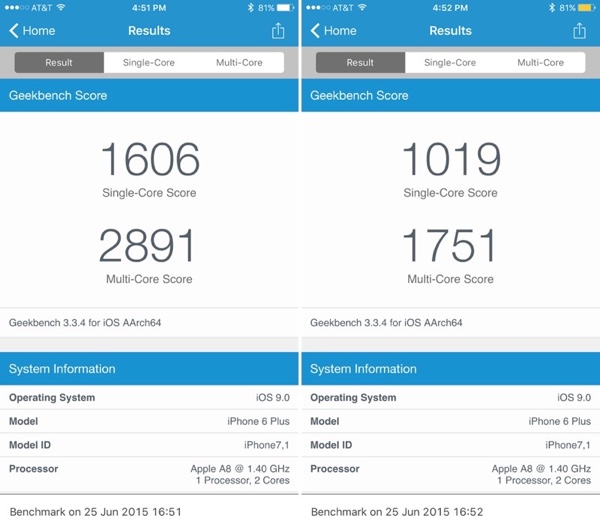 For those that may not be familiar with iOS 9’s Low Power Mode, it is provided as an option on a standard alert view when the battery level on an installed device reaches the 20 and 10% mark. Users are able to quickly toggle the feature on, indicated by turning the battery indicator yellow. For those that pre-empt that, the fact that they may want to conserve as much power as possible the feature can also be toggled on and off via the Battery section of the iOS 9 Settings app.