Here’s a list of iOS 8.4 compatible jailbreak tweaks and apps available on Cydia. The list is updated regularly, so check back for updates from time to time.

As expected, although probably a little quicker than most would have anticipated, the TaiG team pushed out a new version of its tool to provide an untethered jailbreak on iOS 8.4 almost immediately after Apple flipped the switch to release the firmware. The jailbreak not only removes the limitations of Apple’s walled garden in iOS 8.4 but like v2.1.3 before it also integrates Cydia 1.1.18 and updated UIKiT Tools among other bug fixes, making it a formidable jailbreak solution. But if you’re planning on going through the jailbreak process, or have already been through it, just what tweaks and extensions are already compatible with iOS 8.4? Thankfully, there’s a list for that. 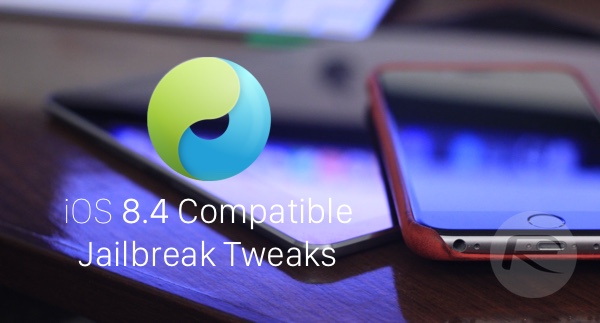 Thanks to the crowdsourcing power of the jailbreak community, we now have a list of tweaks that are, and are not, compatible with the latest iOS 8.4 jailbreak. The tweaks that are fully compatible with iOS 8.4 are highlighted in green, while the ones that aren’t are flagged in red. Partial or slightly broken compatibility is marked in yellow. We recommend that you do not install the tweaks flagged in red or yellow, as it can cause your device, in some cases, to go into a dreaded boot loop. You’ve been warned.

Given the fact that jailbreak is still fairly new, surprisingly many of our favorite tweaks and packages are already compatible with iOS 8.4. Packages such as Ryan Petrich’s Activator, which is used consistently with a number of additional tweaks, currently offers iOS 8.4 support through v1.9.4 which is available directly from the developer’s personal repository in a beta format. Another popular package, Auxo Legacy Edition by A3Tweaks, is showing as offering full iOS 8.4 compatibility and is available via the default Cydia repository. In addition to these, another popular tweak Springtomize 3 for iOS 8.4 has also been released.

You can find the full list of iOS 8.4 compatible jailbreak tweaks below:

This list of iOS 8.4 jailbreak tweaks is being constantly updated by the community. Check back here for updates.