A new video has cropped up online showing an iPad running Apple’s latest firmware – iOS 7 beta. Check it out after the break.

Having been originally announced at Apple’s annual WWDC event, iOS 7 really made a solid headline in the blogosphere due to its polarizing nature. While many users have mixed opinion regarding the Cupertino company’s latest mobile OS, there were many things which were left unanswered, mainly, what does the iPad version of iOS 7 beta looks like?

Today, a Russian YouTuber who goes by the alias Rozetked has posted what he claims to be an exclusive hands-on with iOS 7 beta running on an iPad.

The feature set, as you’d expect, is similar to what we’ve already seen on the iPhone and iPod touch, except it’s on a bigger screen of the iPad. From the lock screen to the home screen, Control Center, multitasking and whatnot, everything is the same. 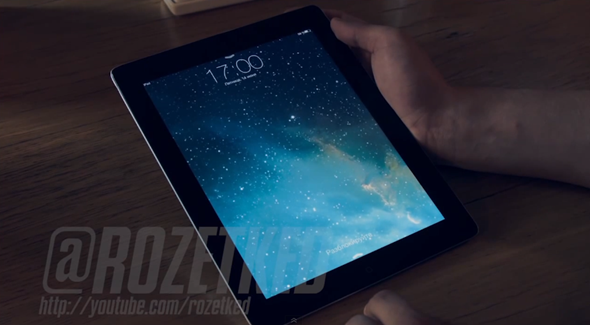 After watching this video I really have to admit that iOS 7 looks somewhat better on an iPad compared to the iPhone or iPod touch. In its current state, and having tried out iOS 7 beta 1 on my iPhone 5 for a full day, it’s super buggy and definitely not ready for primetime usage just yet. Of course, this is to be expected from any software that carries the beta moniker on its lid.

The video does not show off much, but gives us a good glimpse of what we should expect when iOS 7 beta does land on the iPad, eventually in the near future. Check out the video below and have a glimpse of it yourself:

Apple announced last week that the iPad version of iOS 7 beta will be rolled out to the iOS Dev Center in the coming weeks.

We at Redmond Pie have mixed thoughts about iOS 7 beta. Personally I have found it somewhat impressive – and fresh, may I add. Having been a part of Apple’s ecosystem since iPhone 4’s release back in 2010, it’s good to see a fresh new look and a bunch of new features added to iOS.

Here’s to hoping that Jony Ive and the team cleans up the icons a bit more to make them look less ugly.