iOS 6 Will Reportedly Bring Siri To The iPad, Here’s What It Will Look Like [IMAGE]

When Siri was launched back in October along with iOS 5, many iDevice users – myself included – were a tad bemused that Apple had decided to make its exciting new voice assistant a feature exclusive to the then brand-new iPhone 4S. The Cupertino claims of older devices being unable to facilitate the eloquent (albeit often mishearing) voice-activated sidekick were questioned by many, but with the iPhone 4S frenzy having died down, we all expected March to bring a new iPad inclusive of Siri.

The new iPad brought a bunch of fantastic features including a quad-core GPU, iSight camera, Retina display and LTE – all of which we wouldn’t have swapped for the temperamental voice service. That said, the voice dictation features included made us just wish Apple had gone a little further and added Siri, and according to updates in the current active iOS 6 watch, that wish may soon be granted.

As always in the run up to an iOS release, there has been plenty of talk regarding what to expect with the sixth edition of Apple’s iconic mobile operating system, and whilst we’ve seen and heard much regarding Apple’s in-house maps service, it also appears the fruit company’s market-dominating tablet will finally be acquainted with Siri.

There were also some fears that because the iPad is held (or sat) father away from the mouth, the iPad wouldn’t be able to interpret commands properly, but sources of 9to5Mac have dispelled that notion, reporting that the iPad version works just as accurately as the iPhone version – that’s if, of course, you would deem Siri to be accurate at all. 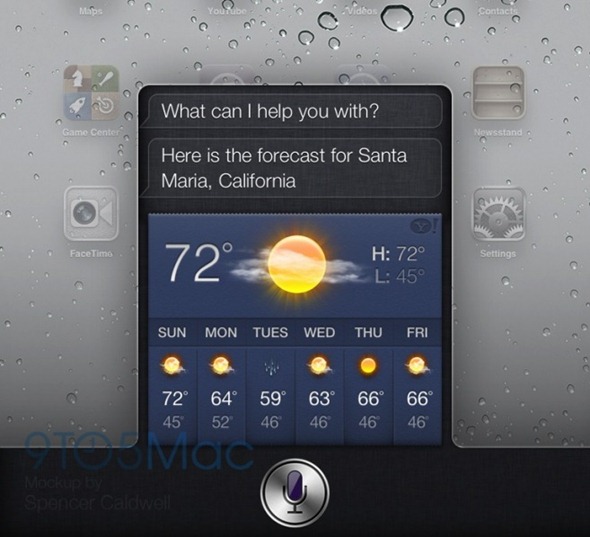 It won’t be, says 9to5Mac’s report, a full screen affair, although in truth, we wouldn’t expect it to be on such a large display. It is currently being tested on both the iPad 2 and the latest model, although given Apple’s previous stance, it could be a third-gen only affair in order to coax consumers into upgrading their hardware. Given that the iPad 2 is still on general sale, it would make sense for Tim Cook’s company to use Siri as a trump card in order to bolster sales of the pricier model – but this is just speculation on my part.

Amid all the excitement, the question has to be asked; does the iPad really need Siri? Of course, as tech fans, we’ve always wanted the option of Siri on our iPads, and felt left out when only iPhone 4S housed the ability to talk to their device, but considering most of us haven’t socially accepted talking at a device in a public place, would talking to a tablet be a step too far?