iOS 10.2.1 Release Notes / Changelog: Here Are All Changes In One Place

Here’s official iOS 10.2.1 release notes and changelog, showing granular information about all the changes, improvements, and additions that have made it into Apple’s latest firmware release, which is iOS 10.2.1, for iPhone, iPad and iPod touch devices.

Nobody really expected iOS 10.2.1 beta process to begin so soon after iOS 10.2 dropped to the global public, let alone actually have the full and final release of it so soon. 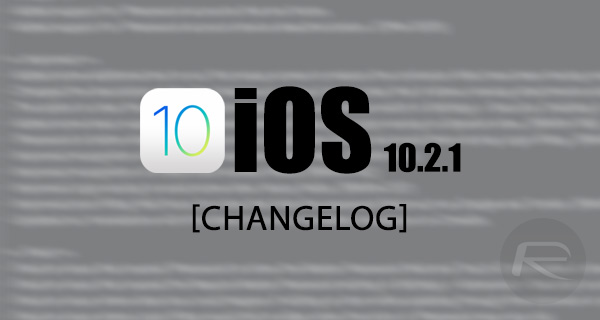 As we have come to expect with Apple and the company’s commitment to quality, iOS 10.2.1 has already been in the hands of registered developers and public software testers for over four weeks now prior to this release. That means we already had a chance to interact with and inspect iOS 10.2.1 to try and ascertain what’s exactly new before Apple actually made the firmware public for all today.

Those initial pre-release seeds which were issued to developers and public testers have allowed us to actually come to the conclusion that iOS 10.2.1 is in fact a minor point-update that isn’t going to ignite a fire of enthusiasm amongst iPhone, iPad, and iPod touch owners. And today’s final release, and subsequent availability of the official release notes as well as security content changes, has confirmed all that.

The full and final changelog for the iOS 10.2.1 from Apple shows that:

iOS 10.2.1 includes bug fixes and improves the security of your iPhone or iPad.

As for security content, the following has changed in iOS 10.2.1:

For those with a compatible iPhone, iPad or iPod touch, iOS 10.2.1 firmware update is available to download as an over-the-air (OTA) update right now. It is also available as a full IPSW download for those who may want to restore or update their iOS device using iTunes. You can find more details in our initial iOS 10.2.1 post here: Download iOS 10.2.1 Final Version IPSW Links For iPhone And iPad.