iOS 10.1.1 Is No Longer Being Signed, Here’s What That Means For Jailbreak

So it has happened. iOS 10.1.1, and even iOS 10.1, is no longer being signed by Apple. With a jailbreak being apparently imminent, here’s what this means for jailbreakers.

With Apple no longer signing iOS 10.1 and iOS 10.1.1, this makes the most current release, which happens to be iOS 10.2, the only firmware version which can now be installed on iPhones and iPads. If you have already upgraded your devices to iOS 10.2, downgrading to previous versions of iOS is now impossible unless you took precautions previously. 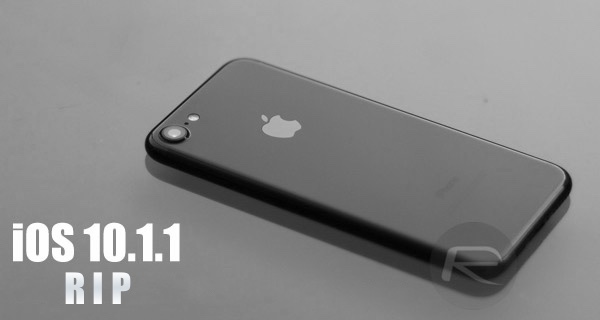 This move by Apple is a significant one given the recent news that a new jailbreak for iOS 10.1.1 by Luca Todesco based on Google’s Project Zero exploits is on the horizon. Given Apple’s decision to not sign that particular version of iOS anymore, the vast majority will be unable to install it on their devices, ready to be jailbroken. If you are already running iOS 10.1.1, then you are just about safe.

Of course, if you are jailbroken on iOS 9.3.3 and saved your SHSH2 blobs which we told you about yesterday in preparation for this exact event, then now is the time to recline in your chair and afford yourself a smug grin. Because those saved SHSH2 blogs will soon let you upgrade to iOS 10.1.1 once Prometheus tool is available even with Apple no longer signing that firmware. In future, you should also be able to downgrade to iOS 10.1.1 using Prometheus provided you are doing it on a device which is already jailbroken.

Of course, if you didn’t save SHSH2 blobs in time when Apple was still signing iOS 10.1.1, you are out of luck now as you can no longer save those blobs for unsigned firmware.

Apple’s decision to kill all iOS versions prior to iOS 10.2 could very well likely be, at least in part, due to the upcoming jailbreak for older versions of iOS as well as a requirement to plug as many security holes as possible by forcing users onto newer versions of the iPhone and iPad operating system. For those who don’t care about jailbreaks, this move by Apple will mean nothing, but for anyone who jailbreaks, today’s developments could be catastrophic.

As has always been the case, we will keep you updated on all the latest on jailbreak front as soon as we get to know more. Stay tuned.

Update: Earlier version of this article didn’t clearly mention jailbreak being a requirement when downgrading from iOS 10.2 to 10.1.1 using Prometheus. This has now been rectified.